Pilots and co-pilots from Argentina, Chile and Peru took part in the South American session of the Dakar training camp together with others from Paraguay, Ecuador and Colombia. Joan “Nani” Roma’s advice was the highlight of the day. 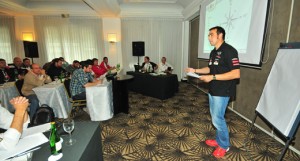 The host countries will be fielding one out of every four vehicles in the 2013 Dakar. Ever since the rally came to South America it has attracted a great deal of local pilots, who are doing increasingly well at the top of the classification. Their ranks continue to swell with newcomers. It is especially for them that a training camp was held in Buenos Aires last weekend, in the image of the Paris camp organised for European pilots in October. The 78 competitors went through an initiation ritual with Nani Roma as their star coach. The 2004 Dakar champion in the motorcycle category and runner-up in the car category last January focused on navigational tips and gave them advice on the pace of life at the bivouac: “This camp is of great value for the amateurs because it helps reduce their anxiety. I think I’d have found it very useful when I first started sixteen years ago“, explained the X-Raid team’s Catalan driver.

On the other side of the desk, the eager pupils did not miss a single thing Roma said, nor the many tips given by rally director Etienne Lavigne and sporting director David Castera. Fresh off his Dakar Challenge win at the Desafío Litoral, Alexis Hernández will be one of the most awaited rookies at the Dakar. He felt a little better equipped at the end of the day: “It’s very important because now I’ve got a clearer idea of what’s in store for me. For instance, I’ve got a more accurate picture of everything you need to do when you get to the bivouac and how you need to prepare your road book for the next stage.” Theory is now over. Practice begins on January 5 in Lima.

The Baja 1000 will start today in Ensenada (Mexico),  before the race we will provide you some videos from the top teams,...
Copyright 2011-2016 Rallyraid.net - RISE Network. All Right Reserved.
Back to top