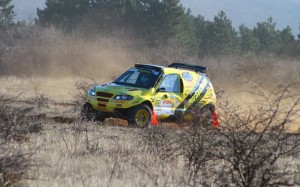 Sólyom Team is not idle even during winter time. They are in the middle of preparations for the 2013 season, plans are forming and expanding continuously. But the ‘spine’ of the year is ready already the ‘body’ will be built around this.

The reconstruction, renovation and expanding of the team’s workshop started already in December 2012. Instead of the former one there will be space for three cars at the same time. Installation of the twin column lifter has also been completed. Hopefully this increased capacity will make the reparation and reconstruction works become faster and easier.

The reconstruction of the team’s old race car, the Lada Niva called Blatta (Cockroach) comes to an end this year and also HAWKIA will go through some important modifications until the start of the season. In the past few weeks the team managed to get the sport registration plate for the car, and as during this procedure the technical inspection has been done, HAWKIA can be dismounted now. The main goal is to make HAWKIA easier, where there is excess weight on the car, the most possible should be eliminated. The replacement of the complete electronical system and the construction of a new dashboard. Unfortunately the gearbox is still a big question mark, but plans already exist for this as well. Because of the above modifications of course also the shape of the car will change in some spots as well. The most spectacular change will surely be that the habitual yellow-black colours will change to graphite grey-red. 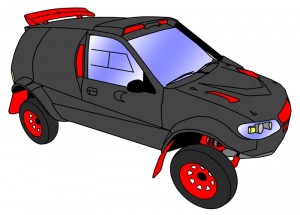 As for the sponsors of Sólyom Team, there is no big change. Strategical partners of the team are still LaserSystems and Industrial Support. Sponsors of the 2013 season: Schriffert, Loctite, MPM Oil, Texaco, Total Parts Hungary, P.O. Autó, EnerGOfair and Kincses Szerszám. Thanks to the excellent cooperation, the media partners of Sólyom Team will remain the same and follow the life of the team also in 2013.

The 2012 lineup of the assistance team had to be modifies for personal reasons, but confirming the trio of Gábor „Dög” Becsei, Róbert „Roberta” Pataki, Bonifác „Mónika” J. Orosz, who already did a great job last year in Athens and Veszprém, proved to be a very good decision of the team manager. In 2013, Viktória Besenyő retakes the role of team manager at the rallies and she has soldierly plans for the season. Of course, German crew Björn Hrabal – Walter Hrabal with their Mercedes G stays with the team and, last but not least, the Olivér Sólyom – Mátyás Galbács – HAWKIA trio will also be at the starting-line.

Sólyom Team plans to take part in the whole Hungarian Championship and beside that they want to take part in other countries’ rallies. A total eleven events make up the racing calendar of the team, as follows in chronological order

This year once more Sólyom Team will be the promoter of two rallies. The team will be responsible for arranging the matters of the 24 Hours Rally Raid Greece that will be organised in Athens at the end of the year, in November and Evia Rally’s successor HELLAS RALLY RAID, also in Greece. About these races all information will be available on www.solyomteam.hu and on the promoter sites on Facebook. Because of the chronological order, of course, Sólyom Team focus their efforts on Hellas Rally Raid in the upcoming weeks because 21-26th April is  day by day closer.

Olivér Sólyom: “What can i say? These are our plans. What will come true from them… We’ll see. I think our team is lucky because thank to the support from our sponsors we are still stand on our feet and we are still present in cross-country rally. And in Mátyás Galbács I found the person, who is ‘present’ continuously with a constructive approach, not only phísically but also mentally, and is a great source of inspiration for me. I can say that Matyi became my brother. To the contrary of this positive thought I have a negative remark: Hungarian cross-country rally field decreased dramatically in terms of participation, according to my counts with us there will be only eight crews will make up the ‘heart’ and there can be one-two more crews at each rally, randomly. I am really sorry that in the past two-three years after many unnecessary fights we reached this point, but I want to express my biggest appreciation to the current leaders of the Cross-country rally committee who try to solve the situation and develop this sport in Hungary. I hope that this season will be the start of a way up for Hungarian cross-country rally sport. But until the first rally we still have a lot to do so at this point I want to concentrate on our own tasks in order we could have a good year free of problems.”

Mátyás Galbács: “We are through a very hard season and a probably even harder year has already started. I am very happy that I can co-drive Olivér this year again. We do well together what we do, we work together successfully, so it was no question if I accept the co-driver’s seat again. I should like if everything goes well and smoothly in 2013.” 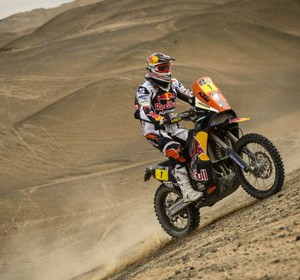 Powered by Red Bull. Look back on some of the highs and lows from the 2013 Dakar Rally in this fantastic highlight reel.   brightcove.createExperiences();
Copyright 2011-2016 Rallyraid.net - RISE Network. All Right Reserved.
Back to top