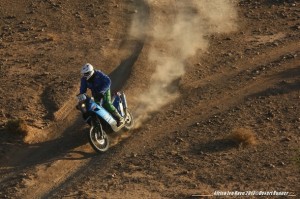 New Year’s Eve was celebrated at the camp with a menu of foie gras, grilled steak and braised potatoes, without forgetting the chocolate and Champagne. Then, at midnight, a traditional firework display was put on by Team ESSERS. In the morning, the competitors of the Sonangol Africa Eco Race resumed the Moroccan track for a Special of 343 km between Oued Draa and As Sakn. A stage without any major difficulties including a rather selective trial section and a portion of 30 km that was a true driving delight for the riders and drivers.

Norbert DUBOIS had a big smile on his face as he crossed the finish line at As Sakn swept along by a powerful Atlantic wind. The Parisian rider had just brilliantly won the Special, his first since the last edition of the Sonangol Africa Eco Race. After breaking his hip in April during motocross training, Norbert worked hard in order to get ready for the race, without actually getting on a bike beforehand in order not to to take any risks. Norbert DUBOIS continued to grow in confidence every day and even though he began the rally very cautiously, today he managed to win the Special:
“I’m happy because at last I feel good on the bike. I didn’t have any problems and although there were a lot of pitfalls, I was able to maintain a sustained rhythm and have fun on the bike. The rally is still long and I’m realistic. I’ll continue with my plan to go all the way.”

In the classification of the 4th stage, Norbert DUBOIS got back 9’21 over Guillaume MARTENS who is in 2nd. The Dutchman is ahead of Martin FONTYN by 14’45 also on a KTM. Once again, the first 450 to cross the line was the HONDA of Patrick ARNOULT in 4th place 22’18 behind, just in front of Joseph PALACIOS on his KTM. Overall, MARTENS is still leading ahead of FONTYN but DUBOIS is coming back quickly and as he said himself, the rally is still long.In the quad category, whilst Emma CLAIR tends to her injuries in France, Stefano DALLA VALLE was able to set off again after encountering problems on the 2nd stage. The Italian rider finished in 17th position today. Patrick POIZAT, the competitor on the N°118 bike was in the same situation having suffered problems during the 3rd stage but he was at the arrival to greet his friends. The Frenchman from Perpignan abstained from this Special more from fear than misfortune, as the regulations allow on the Sonangol Africa Eco Race. Having abandoned a Special, the participants are still able to continue to take part in the race by taking maximum penalties.

The cars and trucks categories were fascinating today. First of all because John Louis SCHLESSER once again came back to camp without fault, winning the Special having left behind the KAMAZ because of his late arrival on the departure line. A spectacular performance explained by the leader, with humor as always:
“I arrived late on the line because I thought that René METGE had given us extra time to sleep in because of the New Year! Seriously though, there was some confusion about the departure schedule but it wasn’t important because it allowed me to attack the race. The last thirty kilometers were so much fun. At the beginning of the race, I stayed behind the KAMAZ for a moment and I can say that the young Russian driver really impressed me with his driving skills.” 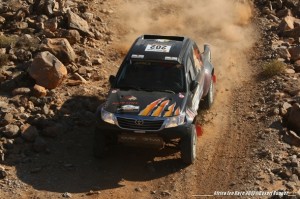 Behind “The Boss”, although not having any problems, Jérôme PELICHET and his TOYOTA let another 3’13 slip. In 3rd position of the day, we found Miroslav ZAPLETAL with his prototype HUMMER that perfectly absorbed the rocky trial sections. The Czech finished 8’55 behind the leader, only 6 seconds in front of Jacky LOOMANS. Unfortunately, sad news awaited Frits DRIESMANS, Jacky’s copilot, at the finish concerning the state of health of his father. The Belgian immediately made the decision to abandon and left Frits to rejoin his family at home. It’s a shame for the rally to loose such an important crew but it also proves that Team LOOMANS is a true family.

We should also mention a great performance from the Egyptian driver Abdelhamid ABOUYOUSSEF who brought his VOLKSWAGEN Tarek buggy home in 6th position, just behind the NISSAN Navarra of Portuguese Paulo FERREIRA. 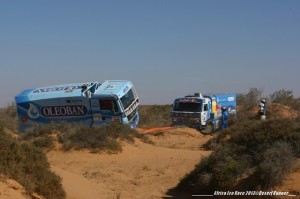 The truck category put on a show for us, notably Elisabete JACINTO. Having started out in the morning behind the KAMAZ and the TATRA, the Portuguese driver was extremely motivated and pulled out the big guns: “I decided to attack today. When I saw the TATRA of Tomas TOMECEK stop, it motivated me even more. I got back behind the KAMAZ and we had a good fight. I was maybe too enthusiastic because I took off on some camel grass and my MAN went over on it’s side. The driver of the KAMAZ came to help me get out and they pulled us back onto four wheels. I thank them enormously and I’m very happy to have won the Special.”

She wanted to underline the good sportsmanship of the KAMAZ crew who didn’t hesitate to stop and help when they could have taken advantage of her accident to reinforce their overall lead. It wasn’t Anton SHIBALOV driving the fast Russian lorry today, but Dmitry SOTNIKOV because the team decided to change the driver every other day. For Tomas TOMECEK, he managed 3rd place behind the Russian KAMAZ and the Portuguese MAN; his TATRA suffered an air leak on the braking system. He had to stop to repair it and lost a quarter of an hour doing so.

The vehicles engaged in the Classic category continued their prepared track to avoid major difficulties. For the moment, Stéphane HENRARD with his PORSCHE leads the race easily. 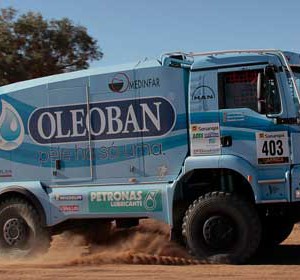