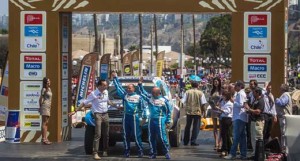 The Argentinean duo of Lucio Alvarez and Ronnie Graue led the way in a superb second position, as Overdrive Racing Toyotas held second, 14th, 16th, 22nd and 29th positions after the opening 13km special stage of the 2013 Dakar Rally at Pisco in Peru on Saturday.

The two Toyota Imperial South Africa Team Hiluxes of Giniel de Villiers and Duncan Vos were classified in seventh and 10th in the overall standings.

One-hundred and eighty-three motorcycles, 38 quads, 153 cars and 75 trucks left the ceremonial start in Lima and drove down the Pacific Coast Highway to the opening special stage around the bivouac in Pisco. Competitors had spent the previous three days attending registration, documentation and scrutineering checks at the Magdalena site in Lima.

“We were able to carry out a shakedown before the start to give the cars a final check over,” said second-placed Alvarez. “This test allowed us to adjust the shock absorbers and solve a small problem with the electrics.”

Australian Geoff Olholm and co-driver Jonathon Aston held 22nd overall in the Cairns Coconut Resort-supported Toyota, but Venezuela’s Nunzio Coffaro lost around 24 minutes with technical problems and was classified at the rear of the field at the wheel of the Team Azimut Toyota with co-driver Daniel Meneses.

Tomorrow (Sunday), teams tackle the first loop stage around the Pisco bivouac and through some treacherous sandy terrain. In a total route of 327km, cars will tackle 242km of competitive action before returning to the Pisco bivouac for the second night. 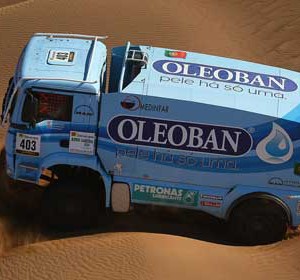