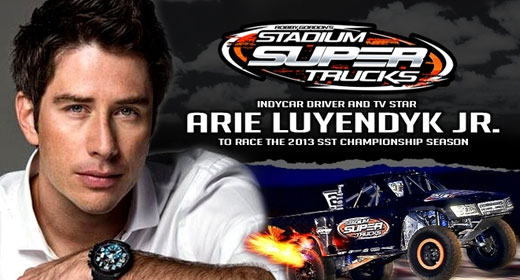 Luyendyk Jr., who has participated in numerous off-season test sessions in the Gordon designed-and-built race trucks (40 identical race vehicles are being built in all), has come up with an innovative way to fund his new passion for off-road style racing on dirt in stadiums. He will have his fans help him, and, in return, they will have their photo, among possibly thousands of others, placed on his Stadium SUPER Truck. A website specifically dedicated to crowdfunding is in place and donations are currently streaming in on behalf of the driver; www.arietruck.com

“To have Arie Luyendyk Jr. in our series, it gives us Indy 500 winning genes, a TV personality and a fan base that is different than any other driver’s fan base in motorsports today,” said series founder Gordon. “We’re really excited to have Arie come participate in testing and he’s done a good job getting accustomed to the 600 horsepower Stadium SUPER Trucks.”

Luyendyk Jr., 32, is the son of two-time Indianapolis 500 winner Arie Luyendyk, and has competed in various racing series from Formula Ford to 12 Hours of Sebring to the Rolex 24 Hours at Daytona. He excelled by finishing runner-up in championship points for the 2002 Indy Lights Series and qualified for his first Indianapolis 500 in 2006. He was voted Indy Lights “Most Popular Driver” four years in a row from 2003-06.

More recently, Luyendyk Jr. might even be more widely noted for placing second on the eighth season of the reality show The Bachelorette, in which he was attempting to win the heart of bachelorette Emily Maynard.

“Doing what you love is most important and racing is my life, my passion,” said Luyendyk. “The thrill I get when I’m racing is indescribable. I’ve always wanted to be able to better share that experience with the fans.

“I think with this (fan) initiative, a part of everyone will be right there racing for the win with me,” he said. “We’ll be in it together as a team. Thank you in advance and I’ll see you at a Stadium Super Truck race this season!”

With 62 starts in the Firestone Indy Lights series, Arie Jr. holds his own impressive statistics finishing in the top 10 in a remarkable 76 percent of his races, including winning the final race of the 2008 season. Arie Jr. was even voted the Firestone Indy Lights Most Popular Driver four consecutive seasons. In 2006, Arie Jr. made his Indianapolis 500 debut and represented Team Netherlands in the A1GP Championship in 2007. He has also competed in the 24 Hours of Daytona in the DP category and the 12 Hours of Sebring in the GT class. 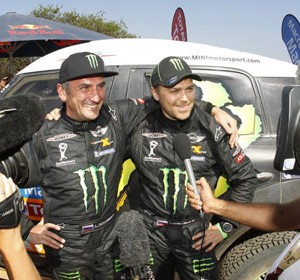