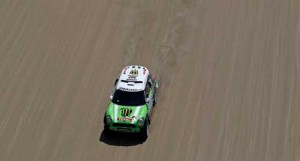 In the third special stage, French pairing Stéphane Peterhansel / Jean-Paul Cottret took their green MINI ALL4 Racing to third position, thus defending their overall lead. At the end of the day, Nasser Al Attiyah in a buggy and Robby Gordon at the wheel of a Hummer were the only ones who were able to set faster times than the leading pairing. “Apart from a minor navigation mistake, it was a good day for us,” said Peterhansel. “I’m happy that we are in such a good position. In the coming stages, the buggies arguably will enjoy an advantage. Therefore, it’s good that we currently are in the lead.”

Following a day to forget, the Spanish/French pairing Nani Roma / Michel Périn in the yellow MINI ALL4 Racing did better, on day three – and finished fifth. As they started into the special stage from 17th position, they had to overtake several rivals to work their way back up. “I didn’t want to overdo it. When there was a chance to overtake an opponent I did so but if not I preferred to stay behind,” revealed Roma. “Keeping cool in this situation was mentally exhausting but for me, this was the day to return into this race.”

Meanwhile, the two Russians Leonid Novitskiy and Konstantin Zhiltsov confirmed the good competitiveness they had displayed in the previous stages and finished sixth, with their orange MINI ALL4 Racing. With this result, Novitskiy defeated Carlos Sainz in his buggy! “The dunes were demanding, today,” said Novitskiy’s navigator Zhiltsov. “But apart from a small navigation mistake, things went well, for us.” In the overall ranking, the Russians currently hold fifth position.

Today, Argentinean Orlando Terranova and his Portuguese co-driver Paulo Fiúza were the Monster energy X-raid team pairing that had to cope with a dose of bad luck. At first, they lost a few minutes due to a navigation problem and then, their BMW X3 CC got stuck in the sand several times. Boris Garafulic (CHI) and Gilles Picard (FRA) took their MINI ALL4 Racing to 20th position, with German pairing Stephan Schott / Holm Schmitt encountering problems in the opening stages of the special stage and therefore had to settle for finishing xxth, with their MINI All4 racing.

For Poland’s Krzysztof Holowczyc and his Portuguese navigator Filipe Palmeiro, the 2013 Dakar came to an early and sudden end, today. Following a jump over a dune crest, their MINI ALL4 Racing made a hard landing and afterwards, the Pole complained about back and rib pains. He was flown back to Pisco accompanied by doctors and Palmeiro drove the car to the bivouac. 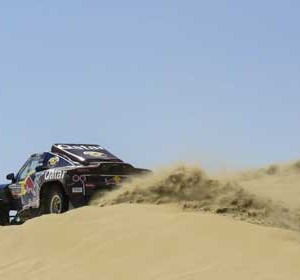 The Qatar Red Bull Rally Team maintained their 100% record at the 2013 Dakar by winning a third consecutive stage in the deserts...
Copyright 2011-2016 Rallyraid.net - RISE Network. All Right Reserved.
Back to top