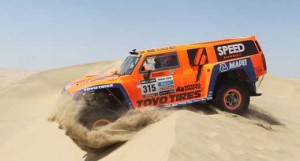 After facing a few obstacles during the first couple of stages in this year’s Dakar Rally, Robby Gordon and the SPEED Energy / Toyo Tires / MAPEI team bounced back with a podium finish in Stage 3.

Stage 3 took competitors from Pisco to Nazca for a 243KM Special through some of the Rally’s toughest dunes. Dunes that would be suitable for Robby Gordon and his HUMMER. Starting in 13th position today, Gordon quickly picked off his fellow competitors one by one. By KM29, he was already in the top-5 moving his way to the top. At KM60, he quickly gained two spots, moving to third place and only one minute and 46 seconds behind the stage leader. At KM100, Gordon would gain another position and his last for the day. He went on to finish second, only one minute and 18 seconds behind the stage winner. What Gordon seeks is still an overall win even if he is down 46 minutes to the leader, Stephane Peterhansel. He knows that Peterhansel stands in his way, making it imperative for Gordon to perfect every day with few mistakes.

“It was a good special for us. We had zero issues, and we even played parts guy to Johnny Campbell, which probably caused us to lose about 2 minutes doing that. The minute we got beat we gave away, but the reality of it is that we got beat whatever way you look at it. The only car that I’m concerned with is Peterhansel; we need to be putting as much time as we can on him every day. We’ll be focused and ready to make another spot up and get a stage win. We are starting up front now, so it should be a good day tomorrow,” commented Gordon shortly after hearing the results of the day.

Gordon in his SPEED Energy / Toyo Tires / MAPEI HUMMER now sits in 13th place overall, hoping to chip away in the rankings day by day. The competitors now head to the town of Arequipa and face mountains dunes that reach in elevation an incredible height of 2,200 meters. 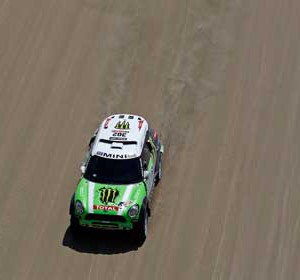