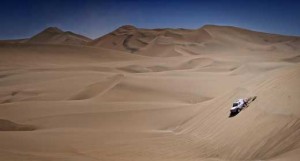 Stage 3’s day of dunes was always going to be hard and the competitors certainly weren’t disappointed. At the head of the field Nasser Al-Attiyah in his buggy was shadowed almost the whole way by Robby Gordon in his Hummer, while Carlos Sainz lost nearly half an hour with an electrical problem and Poland’s Krzysztof Holowczyc crashed his X-Raid MINI so hard that he needed to be evacuated in the medical helicopter…

But behind, driving carefully over the soft sand was G-Force’s team leader Boris Gadasin and his cautious approach really paid off as he came in a highly creditable 8th overall.

Boris Gadasin: “Today’s stage was interesting with lots of difficult sand and it was very nice to drive. Unfortunately we lost quite a lot of time as we ran with the tyre pressures to low which meant that we couldn’t slide the car too much. At one point we saw our team mate Vladimir Vasiliev changing a wheel. I hope it was nothing serious.” 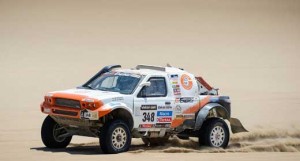 Alex Kuzmich: “Today was harder than yesterday with big differences in altitude and dunes with much sharper edges which make them much harder to read. There were also lots of nasty rocks so we drove carefully, not taking any risks.”

Unfortunately team-mate Vladimir Vasiliev had a harder day. Two punctures is actually something to be prepared for in the Dakar but one of the sharper dunes caught him out. The drop was longer than he expected, the nose dug in and the car flipped. Over an hour was lost as they got their G-Force Proto back on its wheels but at the finish he was still in a good mood. “This is still only the beginning,” he smiled.

Gadasin’s 8th moves him up to 12th overall, 3 minutes ahead of Gordon’s Hummer and 1 minute behind Sainz. Vasiliev’s roll means that he also tumbles down the leaderboard to 28th place.

Day 4 takes the teams over the mountains down to sea level… and back up again, an elevation change of some 2200 metres! At 280km it’s also the longest of the rally so far. Vasiliev has some time to recover while Gadasin has eyes on the Top 10… a hallowed place to be for a Dakar first-timer! 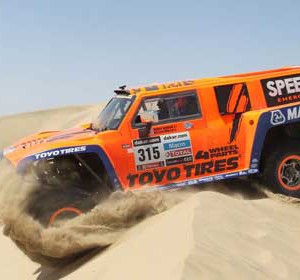 After facing a few obstacles during the first couple of stages in this year's Dakar Rally, Robby Gordon and the SPEED Energy...
Copyright 2011-2016 Rallyraid.net - RISE Network. All Right Reserved.
Back to top