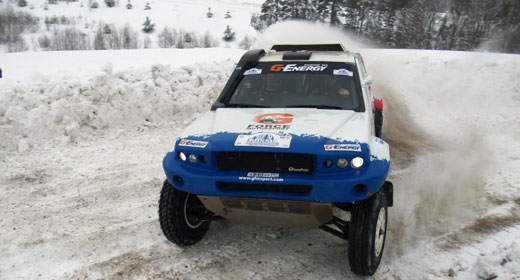 You’d be forgiven thinking that rally-raids are about deserts and dust but the FIA World Cup for Cross Country Rallies and Bajas kicks off here in the snowy forests near St Petersburg, in the aptly named Northern Forest Baja. Missing from the full calendar for the last two years the popular event is being run as a candidate round with the aim of being restored to its rightful place to the championship in 2014.

Event HQ is at the ski resort of Igora, 60km north of St Petersburg and 43 crews passed through scrutineering to line up in a lightly falling snow for the prologue. 4km of sweeping turns and jumps along a specially ploughed track with thick walls of snow either side was all the teams had to negotiate… but it turned into a nightmare for a couple of the top teams… although thankfully the apocalyptic fireballs were falling out of the sky  few thousand kilometres from where we were… 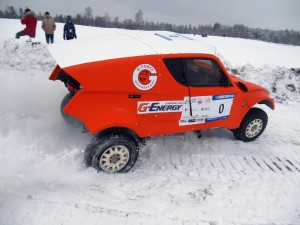 First away was the ‘0’ car, Boris Gadasin in the startling new G-Force. It has an opinion-polarising body-shape but the 8.2l V8 roaring through the trees sounded amazing. Top rookie at this year’s Dakar Vladimir Vasiliev was first contender away dancing his older G-Force between the banks and he ended up blitzing the field, a full 6 seconds ahead of ex-WRC star Harri Rovanpera in his Mitsubishi. “It was very difficult as everything is new for me,” said the Finn. “I am used to driving with pace notes but here I need to tackle a road I don’t know, with not many details from my co-driver. The last time I drove a rally without reconnaissance was 20 years ago, which is a long time!”

But not everyone got around the course without incident. Ruslan Misikov in his stunning new Nart Time BMW lost over 19 minutes. “There was a sharp turn after a crest and it looked as if it went straight on… and we got stuck on top of a snowbank with the wheels spinning. Of course, I am disappointed, we were pushing for podium…” 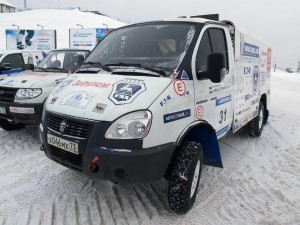 One vehicle that caught everyone’s attention, almost as much as Gadasin’s, was a Gaz Elle van, a Russian version of the Transit Van. At first I thought it was running as some kind of joke, but a look at the timesheets shows that driver Alexander Kostrukov is serious. Out of the 43 starters he finished 25th!

Other names in the field include Ilya Kuznetzov, also back from the Dakar where he was competing in a SAM Mercedes, but his Toyota Land Cruiser beached itself on the same snowbank as Misikov. Benjamin Dzeepaev got his hybrid-electric Yoh into 15th and Yuri Borovikov took his Chevrolet Niva to 11th.

Tomorrow the real action starts. Three times round a 100km loop which is a mix of fast, flowing turns over crests and tough, tight forest tracks with rocks lurking in the snowbanks. Spiked tyres are allowed but as Rovanpera is aware, the whole route is blind, crews only have a roadbook marking the junctions and the worst hazards…