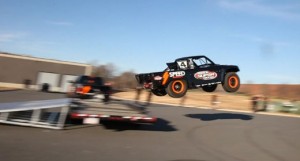 Since 1975, America’s version of the Monaco Grand Prix – the Toyota Grand Prix of Long Beach – has seen legendary drivers in Formula 1, CART/Champ Car and IndyCar create some of the greatest moments in motorsports history.

On April 21, history will be made once again with an unprecedented road course demonstration race by Robby Gordon OFF-ROAD Stadium SUPER Trucks™, which will run just prior to Sunday’s IZOD IndyCar Series® main event.

It has been a long-time dream of Gordon’s to personally redevelop and bring back this unique form of off-road stadium racing that was immensely popular more than 20 years ago – known then as the Mickey Thompson Off-Road Championship.

“Long Beach is going to be insane,” said Gordon, a California native. “Imagine these 600 HP machines drifting around corners and hitting metal jumps, flying over 50 feet through the air on the famous road course that has seen icons like Mario Andretti, A.J. Foyt, Al Unser Jr. and many more. To run our Stadium SUPER Trucks Series here it’s truly a great thing for us as we get to bring even more fun and excitement to the Long Beach event and show racing fans what off-road trucks can really do on asphalt.”

Gordon, who himself competed regularly on the streets of Long Beach in the mid-1990s scored a Trans Am win as well as a podium finish for the Toyota Grand Prix of Long Beach race in 1994. Gordon will be one of the many drivers who will race as well as become airborne (over specially constructed metal ramps) in the only event on the 2013 Stadium SUPER Trucks schedule slated to run on asphalt.

“We are excited to add Robby Gordon’s Stadium SUPER Trucks to our Sunday program,” said Jim Michaelian, president and CEO of the Grand Prix Association of Long Beach. “This will bring a whole new dimension to the multitude of racing activities we have on our weekend program and the sights and sounds of those V-8 trucks going down Shoreline Drive should be awesome.” 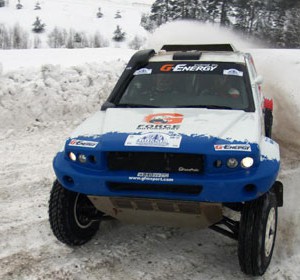 You'd be forgiven thinking that rally-raids are about deserts and dust but the FIA World Cup for Cross Country Rallies and Bajas...
Copyright 2011-2016 Rallyraid.net - RISE Network. All Right Reserved.
Back to top