A success of participation for the marathon race that saw more than 100 competitors to cover 1200 km in 4 days from Marrakech to Agadir.

The new formula of the Enduro d’Agadir/XRally, with its two categories Enduro and XRally, took the start from the city of Marrakech on March 5th. Reflecting the spirit of the African marathon Rallies, more than 100 competitors moved everyday from bivouac to bivouac, from Marrakech to Agadir, passing through the Agafay desert, the Atlas mountains and the typical sub saharian terrain of the “petit sahara” before reaching the Ocean on the beach of Agadir.

For the XRally Category there were 7 special stages for a total of 1.200 km to cover.

The race started at 07:00 from Marrakech and after a liaison of 44 km the competitors reached the Agafay desert for the first special stage. 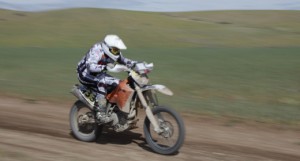 The originally 112km long timed section was reduced to 74 km due to the heavy rain fallen during the night. After a liaison of 44 km the riders reached the the Agafay, also knwon as the desert of Marrakech. The terrain was fun to ride and the navigation with road book was not too difficult to warm up the riders for the first day of the race. The scenary was unusual for Morocco: an incredible green landscape in contrast with the white of the snow on the Atlas mountains.

After the special stage, the riders tackled the stony tracks at the base of the Atlas mountains, passing through some demanding paths that required a more “endure riding style” before a fast final arrival to the village of Taroudant.

Italian Alessandro Fadda won the first stage, ahead of the French Arnold Brucy at his debut on a rally raid race and the Spaniard Antonio Gimeno, who is racing and training at the same time in preparation of the Dakar. Fourth Jean Brucy, who comes back to racing after a long stop (Mongolia Rally 2008) and 16 Dakar participations and a 4th place as best result in the year 2000. François Charliat finished 5t. François was Cyril Neveu’s team mate on a Honda NXR750 in the Paris-Dakar 1987-88-89.

Andrea Fesani, winner of the Rally Lite Desert Series 2012 was the first to start. His performance was spoiled by a fuel issue that made him lose valuable time, closing as the very last rider at the bottom of the time sheet.

Arnold Brucy: “This is my first experience with the navigation and the road book. Today it was quiet easy for me as I followed my father (Jean), trying to understand and adapt quicker to this new discipline. I had fun and tomorrow I will try to ride alone so that I can learn the navigation with road book”.

In the Enduro category the French Enduro Champion Loic Minaudier was the fastest and finished 11 and 15 seconds ahead of Richard Borer and Thierry Bovet. 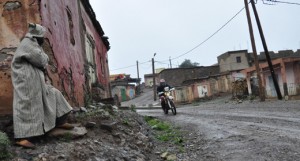 A storm surprised the riders as they were approaching the first special stage in the Atlas Mountains.
A 50 mt wide river had flooded, moreover the heavy rain and the fog made the visibility very difficult, obliging the Organizers to cancel the first and the second special stages for safety measures. In case of emergency in fact the heli-ambulance wouldn’t have been able take off. The stage was neutralized and the riders completed the race as a liaison.

Despite there was not the challenge of the chronometer, the riders enjoyed particularly the first stage the was climbing up in the mountains on narrow, twisted stony paths reaching 1700 mt above sea level.

At the arrival in Tafraout the riders could finally rest and have a well deserved warm bath. The Classification remained the same of day 1 as both stages were neutralized.

Nicola Quinto: “The stage was beautiful even if it was not timed. It was fun to ride on these stony paths that required a more enduro riding style. The rain and the cold temperatures made the ride even more demanding”.

Stefano Pelloni: “It was a difficult day. It was a pity that both stages were cancelled but I think that the Organizers did the right thing, avoiding the riders to take additional risks”.

The enduro riders were luckier and they could compete the second special stage without problem. The location was fantastic and they could enjoy the demanding rocky paths before reaching Tafraout.

The third day started with 95 km of liaison that alternated some parts on the tarmac to off road paths on sandy ground.

The first special stage saw the riders tackle stony paths with a lot of change of directions, river crossings reaching 1.100 mt above the sea level. The second special stage was very demanding on the navigation that even an experienced rider such as Jean Brucy got lost, losing valuable time. Despite the difficulties with the road book the riders enjoyed riding on sandy terrain and fast tracks before reaching the village of Tiznit.

The provisional podium at the end of the third day was the following: Sandro Calesini ahead of Roberto Zanella and François Charliat

Enduro: the liaison was common for both the enduro and the rally competitors, than there were two special “banderolé” enduro stages of 6 and 5 minutes each on a stony terrain. Once again Loic Minaudier consolidated the leadership in the Enduro General Standing.

Jean Brucy: “The first stage was more technical and required good riding skills while the key element of the second special stage was the navigation. The area was open and there were not so many reference points, moreover there were many traces on the sandy terrain and once I made a mistake, I lost a lot of time to find the correct direction”.

Sjoo Bjorn: “I knew that the navigation was tricky today so I told myself to pay attention on the road book and slow down in terms of speed. But once I was in the stage, I switched off the brain and opend the throttle so I lost the way several times. Anyway It was good fun. It’s my first time on a rally and I need to learn the best compromise: riding as fast as possible while reading the roadbook!

Mirco Miotto: “I struggled in the SS1 as it was more technical and demanding on a hard stony terrain. The SS2 was beautiful. The sun was shining and I had a lot of fun”.

Another technical and demanding day for the competitors of the Enduro d’Agadir/XRally. In the first stage the riders tackled the dunes of the “Petit Sahara”.

As in the previous day, the navigation was the key element to be on top of the time sheet and Alessandro Fadda secured his third win stage ahead of Antonio Gimeno and Arnold Brucy.

At the end of the SS4-1 the crossing of a river was particularly demanding and fun to ride at the same time. The navigation was the key also of the second stage: 54 km of sandy fast track and a precise but not tricky navigation.

Antonio Gimeno, who is training in preparation of the Dakar won the second special stage of the day. Unfortunately a navigation mistake made in the morning spoiled his final result, 4th. Gimeno finished the Stage in front of Arnold Brucy and Andrea Manzone. A short liaison took the riders directly on the beach of Agadir for the last picture of the Enduro d’Agadir/XRally.

Regarding the final classification, Sandro Calesini gained the first spot on the podium ahead of Alessandro Fadda and François Charliat.

Enduro The 4th and last day saw the competitors cover 169 km and compete 3 special stages of 4’,30”/3’,00”/2’,00” respectively. The most spectular was the third one that took place on the beach of Agadir. Loic Minaudier confirmed once again his talent and speed, winning the 13th edition of the Enduro d’Agadir.

The Enduro d’Agadir XRally is the first of the three races of the Rally Pro Series Championship. Next events are the Serres Rally that will take place in Greece from the 26th to 31st of August and the Merzouga Rally, Morocco that will take place in October from the 21st to the 26th. The Championship has a final money prize of 15,000 euro for the winners of the Rally and Rally Lite Category. 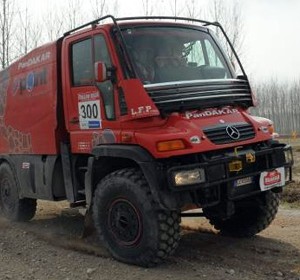 Directly from the Dakar, the Unimog Mercedes Benz are now ready to offer a big show through the Country routes along the Meduna,...
Copyright 2011-2016 Rallyraid.net - RISE Network. All Right Reserved.
Back to top