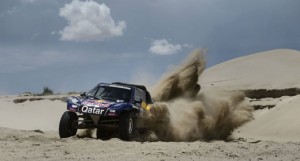 Nasser Saleh Al-Attiyah will defend his Sealine Cross-Country Rally title in the car in which he challenged for honours in this year’s Dakar Rally.  The Qatari has confirmed that he will use his powerful V8-engined Red Bull Buggy in the third round of the 2013 FIA World Cup for Cross-Country Rallies on April 22nd-26th.

The Californian-built machine surprised many people with its pace and competitiveness on the world’s toughest rally in January and Al-Attiyah and team-mate Carlos Sainz won five special stages before mechanical problems cost them both their places in the rally.

Al-Attiyah, who carried out a pre-season test with the Buggy in Spain recently, has vowed to return to South America with a three-car team in January 2014 and the outing on the Sealine event in Qatar will follow his planned challenge for honours in the Abu Dhabi Desert Challenge at the start of next month, although Al-Attiyah hinted during the Rally Guanajuato Mexico that he may miss the UAE event to ensure that spare parts have arrived and the car is completely ready for the Qatar event.

“Lucas and I will use the one car in the Sealine Rally,” said Al-Attiyah. “We now have our own team of European mechanics and will use the event to test new brakes and some other parts on the car. Then, we hope to have the new car later in the year, perhaps in time for a test in Morocco and ready to take part in the event in Egypt. I am looking forward to it a lot.”

The Qatari teamed up with Spaniard Lucas Cruz Senra to win the event last season in an Overdrive-built Toyota Hilux, having crushed the opposition several months previously in a SAM Mercedes 35 CC to win the candidate event across the southern Qatar deserts.

Al-Attiyah’s revolutionary new Buggy came about after discussions with Damien and Casey Jefferies of the California-based Jefferies Racing operation – one of the leading car preparation experts in American SCORE and Baja racing.

Powered by a 7.0-litre LS7 V8 Corvette engine that develops around 347bhp and delivers a massive 520Nm of torque, the car uses a 39mm air restrictor and a Motec M800 engine management system.

Power is transferred to the rear wheels by a six-speed sequential transmission with power shift and a bi-disc cerametallic clutch. It has a reputed top speed of 195km/h. Handling has been improved with the use of double wishbone front suspension with adjustable dampers and a trailing arm rear suspension, again with adjustable damping.

Front and rear ventilated disc brakes with six-piston calipers give the necessary braking, although development work will be ongoing during the Sealine Cross-Country Rally.

Administration checks, scrutineering, the initial briefing and the pre-event press conference for the Sealine Cross-Country Rally will take place at Losail International Circuit, north of Doha, on April 21st and April 22nd.

The ceremonial start will then get proceedings underway on Doha Corniche on Monday, April 22nd and the first of four desert legs begins on Tuesday, April 23rd. Action draws to a close on Friday, April 26th. 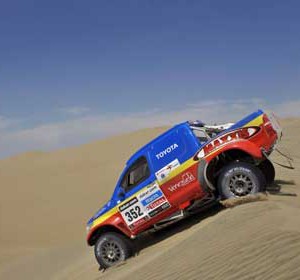 Overdrive Racing will be one of the largest teams entered in this week’s Italian Baja, round one of the 2013 FIA World...
Copyright 2011-2016 Rallyraid.net - RISE Network. All Right Reserved.
Back to top