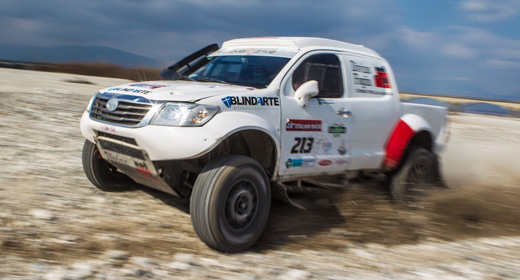 Reinaldo Varela e Gustavo Gugelmin made history today after winning the 2013 Italian Baja, Brazil´s maiden win in a world class cross country rally. The Divino Fogão Rally Team crew, reigning T2 class FIA World Cup champion, beat other 68 duos at the rally at this city´s roads near the Italian border with Austria. The event also marked some other first on Varela and Gugelmin CVs: first time driving a T1 car, first time racing with a sequential gearbox and a debut with the Overdrive organization.

One of the most dramatic events lately, the Brazilians managed to finished it with a total of 3h42m11, a mere 12 seconds ahead on Poland Krzysztof Holowczyc and German Andreas Schulz, who were on-board a works Mini all4 Racing. Fellow countrymen Marcos Moraes and Du Sachs – promoter and technical director at the Sertoes Rally -, consolidate South Americas presence by conquering T2 class laurels.

After Varela and Gugelmin finishing second on the Barretos Rally – Brazilian Cross Country Championship opening round -, the Divino Fogão crew experimented some havoc. Due to weather constraints they were forced to remain in Paris for a couple of nights on their way to Milano. The delays meant a major loss on their acclimatisation plans with the new Overdrive Proto and the new team itself. The two working days erased by snow were compensated with a quick and strong bond with the Belgian crew as Varela explains:

“The top level resources provided by Overdrive guys allowed us to feel comfortable with them from our first meeting. From minute one we felt that a great weekend was on the way: we were about to debut on T1 class and drive against some of cross country great names.”

On Friday´s Super Special stage the Brazilian crew finished second to Krzysztof Holowczyc and Andreas Schulz. Weather still made itself present by forcing organisers to cancel part of the official opening ceremony and commuting Saturday´s special stages roads to those prepared to be used Sunday but on opposite direction.

“That generate a critical component for all competitors”, commented Gustavo, who noticed his surname Gugelmin – he is cousin to ex-F1 and F Indy driver Mauricio -, to the original Italian spelling Guglielmin. “Such itinerary change meant that the road surface would be damaged by heavy use. By starting second we were not that much on the tough side. Anyhow, I can say that we could not spare one second of relax over the week end”, completed the co-driver from Lages, Santa Catarina, in South Brazil.

The competition level was a major mark at the Italian Baja and looked alike the Brazilian Mitsubishi Cup, a major local tournament with rallies known for its short special stages and high competition level. This Sunday Varela and Gugelmin won the first SS, 38 seconds ahead of Russia’s Boris Gadasin e Alexey Kuzmich (Prototype G Force); on the second one Holowczyc and Schulz finished first five seconds ahead of the Brazilians and the last two were dominated by Gadasin e Kuzmich, Holowczyc/Schulz and Varela/Gugelmin second on the third and fourth stages respectively. Overall classification leadership, however, never went to hands other than those from Varela and Gugelmin.

“Talking to some drivers I could see that everybody drove on the limit all time”, commented Varela before receiving his trophy. Gugelmin recalled Holowczyc words minutes before:  “He said that he drove like an evil and could not go faster, something that made us really proud of our performance” 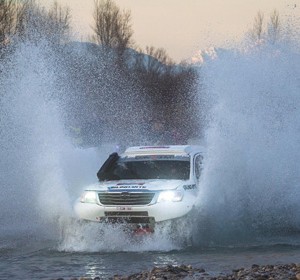 The Brazilian pairing of Reinaldo Varela and Gustavo Gugelmin earned a stunning victory in the Italian Baja, round one of the FIA World...
Copyright 2011-2016 Rallyraid.net - RISE Network. All Right Reserved.
Back to top