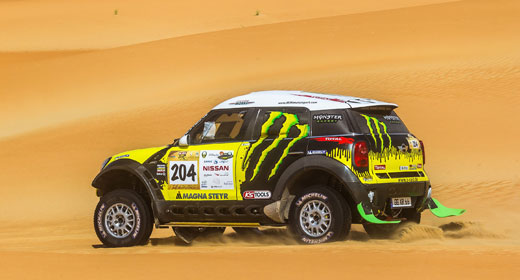 When the teams got out of their MINIs ALL4 Racing, they were completely covered with sand and everybody’s first sentence was: “Man, that was extremely tough!” Today’s special stage took the competitors once again into the heart of Abu Dhabi’s desert. Roma was the first driver to go out into the 250-kilometre special stage. Originally, Lucio Alvarez was supposed to start the special stage but he had somersaulted in the first special stage, resulting in a damaged roll cage. Therefore, the Argentinean wasn’t allowed to continue.

Although Roma had to play the ‘pathfinder’, he succeeded in defending his position at the very top and finished the special stage as winner. “Once, we got stuck deep in the sand,” the Spaniards revealed later in the bivouac. “This incident certainly cost us 10 minutes.” Nonetheless, Roma now holds the Abu Dhabi Desert Challenge lead, with Guilherme Spinelli following in second position. Holowczyc also encountered another difficult day. “We also got stuck several times,” he said. Nonetheless, he and Schulz proved to be too fast for the competitors and finished second, thus giving the Monster Energy X-raid Team a one-two! Thanks to his fine result, Holowczyc worked his way up to 10th position in the overall standings.

For Viktor and Vernon Rempel from Paraguay, the rally unfortunately came to an early and sudden end. While they crossed a dune, the car made hard contact with the ground and as Viktor Rempel complained about pain, afterwards, he was taken to a hospital for a checkup.

Tomorrow’s stage will represent another huge challenge for man and machine: altogether, the competitors will have to cover a mileage of 413.60 kilometres, including a 284.98-kilometre special stage. The menu for the day: business as usual – sand and dunes!