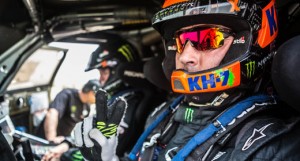 Only a final leg disaster can prevent Spain’s Nani Roma from claiming a first victory in the Abu Dhabi Desert Challenge after another day of spectacular action which saw Dubai-based British rider Sam Sunderland extend his lead in the bikes class with a masterful display in the Rub Al Khali.

While defending champion Jean-Louis Schlesser scored his second successive stage victory on the 266km Nissan Stage 4, taking it with a margin of just over nine minutes to go second overall, the next fastest time on the day was enough to give Roma and French co-driver Michel Perin a lead of 37mins 9secs in the cars category to carry into the final leg in their Mini.

After getting stuck in soft sand and also losing time when they stopped to repair the engine fan, Brazillian Guilherme Spinelli partnered by Youssef Haddad in a Mitsubishi ASX could manage only the sixth fastest time on the day, slipping one place to third, another 20 minutes adrift of Schlesser.

Roma finished the Nissan stage to say: “I just stayed behind Krystof and used his tracks today. It was still a very difficult stage with some very tough patches where, if you got stuck, you would be there for ages. It’s nice to have a strong lead going into the final stage, but at the same time I have to remain focused as a lot can happen on one stage.”

Patnered by Russian co-driver Konstantin Zhilstov, six-times Desert Challenge winner Schlesser said: “Today was a very long and difficult stage. The dunes were very steep and very technical to get through. I wanted to take second place overall, but it is too much to expect to catch Roma.” 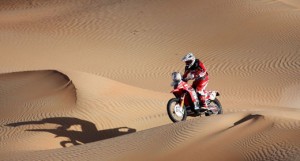 Leading the bikes class by a slender 58 seconds overnight, Sunderland underlined his emergence as a force in international cross country rallying by outpacing some of the world’s best riders as he  increased his lead to 2mins 53secs from Spain’s reigning world champion and six-times Desert Challenge winner, Marc Coma.

Tired, but clearly focused on his objective at the end of the Nissan Stage, he said: “The last part was all piste and I lost my exhaust, and when that happens you lose a lot of power which is what happened now. I just want to take it day by day and absolutely don’t want to think about winning right now. We will see how it goes. Anything can happen as you can see with my exhaust.

“There are so many factors to take into consideration. But I am in a good position and will sit with the manager tonight and talk about how we will tackle the last leg tomorrow.” The UAE’s Khalid Khamis-Ozair finished the day in ninth place overall in the bikes category.

Also on course for a victory, like Roma and Sunderland, if he can avoid problems on the final leg, is Qatari rider Mohammed Abu-Issa who leads the quads category by more than 16 minutes from the UAE’s defending champion Obaid Al Kitbe.

The stage is set for a great climax over the 296km Abu Dhabi Aviation SS 5, with the ceremonial finish for the Desert Challenge taking place at Yas Marina Circuit, Abu Dhabi at 4pm tomorrow.

“The Desert Challenge has again lived up to its reputation as one of the great motor sport adventures,” said Dr. Mohammed Ben Sulayem, founder of the event and President of the Automobile and Touring Club of the UAE, the rally organisers. “We could have three first-time winners tomorrow, but none of them can afford to take anything for granted as one mistake in this event can prove very costly.”

The Desert Challenge, which is taking place under the patronage of H.H.Sheikh Hamdan bin Zayed Al Nahyan, the Ruler’s Representative in the Western Region, is the second round of the FIA World Cup for Cross Country Rallies for cars, and the opening round of this year’s FIM Cross-Country Rallies World Championship. 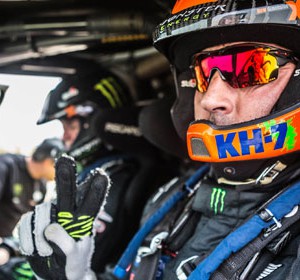 The Monster Energy X-raid Team enters the finish straight of the Abu Dhabi Desert Challenge and made another vital step on the way to securing...
Copyright 2011-2016 Rallyraid.net - RISE Network. All Right Reserved.
Back to top