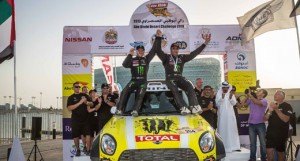 The Monster Energy X-raid Team and the MINI ALL4 Racing once again demonstrated their reliability and consistency. With their yellow MINI ALL4 Racing, Spanish / French pairing Nani Roma / Michel Périn won the Abu Dhabi Desert Challenge – one of the most demanding rallies on the FIA World Cup calendar. At the end of the five-stage event that featured virtually solely sand and dunes, the Spaniard crossed the finish line with a lead of nearly 27 minutes over the runner-up, Jean-Louis Schlesser.

The Abu Dhabi Desert Challenge was anything but easy for Roma. He was the first to start into the first three stages and so, he was the one who had to take the role of the ‘pathfinder’ across the dunes. “Doing so was a huge challenge,” said Roma, “But my co-driver, who is working on his preparations all day long, did a fantastic job.” Consequently, the Spaniard was able to open a comfortable gap over his competitors and could opt for a more conservative approach, in the final stages. “I’m really delighted with having won here,” beamed Roma. “The effort of the entire team was just outstanding.”

Holowczyc quickly got over the problem of day one to demonstrate his skills in the following stages. From day two to day five, he always took his MINI ALL4 Racing to the top three, thus working his way up in the overall standings step by step. “Without the difficulties on day one, Nani and me certainly would have made for a thrilling battle for the win,” the Pole said after having crossed the finish line of the final stage. Thanks to his impressive fighting spirit, he secured the fine fifth place.

Stephan Schott had a big grin on his face, at the end of the rally. “This was a nice, fast stage,” said the German. Over the course of the rally he increased day by day to finish eighth, in the end. “I’m extremely happy with the rally,” he added. “But when an event is over, you always tend to think: ‘Possibly you could have done even better’.” By finishing eight, he secured his best result as X-raid Team driver to date.

“What a great result! All the three MINI ALL4 Racing in the top eight,” said the delighted Monster Energy X-raid Team Principal Sven Quandt. “Unfortunately we encountered some problems in the opening stages but both the team and the drivers did a great job. Nani delivered on a consistent level, Krzystof succeeded in gaining a lot of positions – and in consideration of the competitive field, having finished eighth represents a fantastic result for Stephan.” 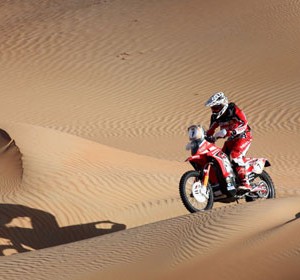 Only a final leg disaster can prevent Spain’s Nani Roma from claiming a first victory in the Abu Dhabi Desert Challenge...
Copyright 2011-2016 Rallyraid.net - RISE Network. All Right Reserved.
Back to top