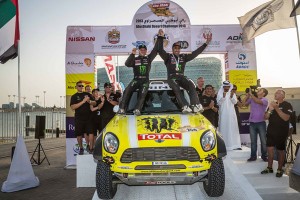 Nani Roma clinched his first victory in the Abu Dhabi Desert Challenge today to round off a dominant display in the cars category, while Marc Coma edged his way to a record seventh win in the bikes class to complete a unique double triumph for Spain.

Despite a third stage win in successive days by defending champion Jean Louis Schlesser on the 296km Abu Dhabi Aviation Stage 5, Roma and French co-driver Michel Perin in a Mini won by 20 mins 58 secs from the familiar blue buggy of the veteran French driver, a six-times winner of the event.

Coma’s bikes triumph came after Sam Sunderland collected a ten minute penalty overnight for a basic technical infringement, denying the Dubai-based British rider a brilliant start-to-finish victory as a reward for outshining the reigning world champion and a host of other stars of cross country rallying. Coma won by just 32 seconds from Portugal’s Paulo Goncalves.

Also celebrating victory at the finish was Qatar’s Mohammed Abu-Issa who came through a series of major scares on theAbu Dhabi Aviation Stage to capture the quads title at the first attempt, winning by just over three minutes from the UAE’s defending champion Obaid Al Kitbe.

Celebrating at the finish, a delighted Roma said: “It’s always nice to win, and the Desert Challenge is really difficult so it’s a good feeling, but I’m also happy for the whole team. In this sport you need a lot of people around you, so this victory was for everyone involved in the team.

“The first three days were really tough because I had to open the stage, so I had to go fast but not make mistakes. After that I could relax a little and sit on my lead. A lot of credit must go to Michel in the co-driver seat for getting us around.”

Bitterly disappointed to have lost his chance of victory, Sunderland finished third and remained philosophical at the end.“It was a really good week for me but I made a big mistake yesterday,” he said. “During liaison I went to talk to the mechanic about my broken exhaust late in the race and after talking to him I forgot to go through the final two gates and got a ten minute penalty. I’m really gutted, but those are the rules.” 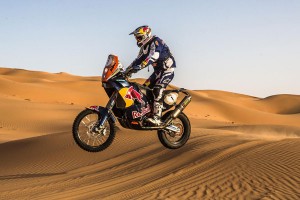 Coma, who has now won the Desert Challenge bikes title five years in a row, said: “I’m very happy to win but feel sorry for Sam because it was clear he was the fastest rider over the five days and deserved his victory. But those are the rules and we have to abide by them.

“For me I was just riding easy for the first three days and just trying to get used to the desert again. I rode harder today, but I knew I had to ride cleanly and not make any mistakes.”

New quads champion Abu-Issa, the third Qatari to claim a Desert Challenge title after cars victories by Saeed Al Hajri (1993) and Nasser Al Attiyah (2008), said: “My air filter was clogged 4km from the finish and my engine just stopped. I had to rip it out and crawl to the finish.”

“It feels great to finish and to win the quads. It was close today because I was leading by 14 minutes coming into the last stage but I made three big mistakes that cost me 12 odd minutes. Luckily, I still won so it’s an amazing feeling, especially because this is my first Desert Challenge. It’s been an unbelievable five days.”

Five days of world-class cross country rallying have reinforced the status of the Desert Challenge as one of sport’s top events. “It was another great week, and a lot of the competitors are already looking ahead to next year,” said Dr. Mohammed Ben Sulayem, event founder and President of the Automobile and Touring Club of the UAE, the rally organisers.

“We have two new champions and it could have been three. It was very disappointing for Sam to lose the bikes title that way after he had been in control. He’s very disappointed now, but will learn from this. He has a bright future ahead of him, and many more years in the Desert Challenge.”

Now heading for its 24th edition next year, the event continues to inspire. Veteran Austrian rider Klaus Schwingenschloegl said: “I’m 62 and the first time I competed here was 15 years ago when it was basically just like a rally. Now if you ask any of the top pro cross country riders they will tell you this is the toughest cross country rally for bikes in the world. I’m really proud to have finished at my age.”

Another rider, Frenchman Christophe Sapy, could not hold back the tears at the finish. “It’s beautiful, tough, I made it,” he said. “I had some bike problems. I’m overcome by emotion, I can’t describe it. I will definitely be back next year.”

The Desert Challenge, which took place under the patronage of H.H.Sheikh Hamdan bin Zayed Al Nahyan, the Ruler’s Representative in the Western Region, was the second round of the FIA World Cup for Cross Country Rallies for cars, and the opening round of this year’s FIM Cross-Country Rallies World Championship. 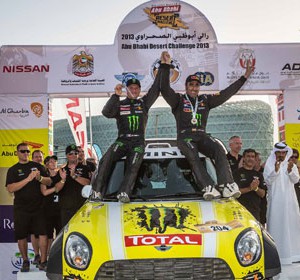 The Monster Energy X-raid Team and the MINI ALL4 Racing once again demonstrated their reliability and consistency. With their...
Copyright 2011-2016 Rallyraid.net - RISE Network. All Right Reserved.
Back to top