Toolimpex Cup: Fodor and Hodola in the lead after Day 2 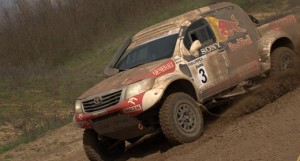 After a day full of turns in all meanings of this word, Imre Fodor is in the lead in front of Adam Malysz. Among bikes and quads last year’s bronze medallist of othe UEM European Championship, Richárd Hodola was the fastest.

The gap of one mere second between Adam Malysz and Erik Korda yesterday promised a nice battle between the two sportsmen. And actually this is exactly what happened on the first two specials of Day 2. On the first one, the two Toyotas clocked the same time, but on the second, longer and very muddy, Korda was much faster then Malysz but got stuck behind him. 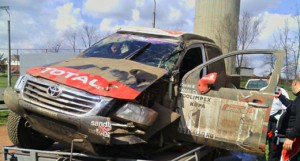 Unfortunately this exciting fight ended suddenly when in the very first corner of SS3 Korda caught a tree, the front left suspension broke off and the car rolled heavily. Fortunately the Korda and his co-driver Csaba Fábián were not injured, but they weren’t able to continue the race. But Malysz soon got another Hungarian challenger, Imre Fodor, in a similar Overdrive Toyota Hilux, and by the end of the third special Fodor took the lead. After Malysz had a puncture on the last of the day’s five specials, the gap between him and Fodor grew to 4’34”. 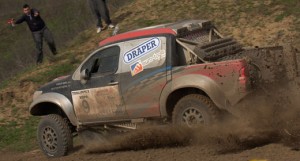 Third on Saturday’s stage was last year’s winner in Nagykálló, Zsolt Murczin with his strong Mitsubishi L200. He also had his share of adventures (like a broken windscreen wiper which was unpleasant on the muddy sections) but generally enjoyed the day. Imre Varga finished fourth with also some technical mishaps which were more annoying than dangerous. Rookie in cross-country rallies, Antal Fekete, competing with the old Nissan of Pál Lónyai, tried to “survive” the mud but he did it so well that he climbed up the sixth place behind Juraj and Danka Ulrich from Slovakia.

But the longest day of Toolimpex Cup wasn’t a lucky one for all teams. In the BMW of Pál Lónyai the cardan was broken and the gearbox damaged so last year’s runner-up of the Hungarian Championship had to withdraw from the race. Just like Wieclawek brothers from Poland, whose Mitsubishi had engine problems. Béla “Gombi” Horváth also had engine problems but after a lengthy repair session they are able to start on Sunday.

Clutch was broken in both cars of Vadász Racing but after some repair they can go on tomorrow.Olivér Sólyom was stuck with many others in the extra deep mud on SS2 (this part was removed from the track for the run in the afternoon) and by the time he was rescued he had time only to enter the parc fermé. So he could continue on SS4 – but without service.

Lukasz Komornicki did some “expedition in the forest” right on the firt special, but apart from some (optical) damages on the front right part of his Pajero obtained in a close encounter with a tree, he had a problem free day. As for the tracks, the Pole summarised his experiences as “Dakar in small with mud instead of sand”.

But hero of the day was the crew Maciej Stanco – Ernest Górecki from Poland who had a bad roll yesterday with their Porsche Cayenne but they went on – although they couldn’t replace the broken windscreen. Both their rivals and the spectators were truly impressed by they attitude that the two Poles defied the massive amount of mud pouring into the car and that they can’t hear a word of each other because of the broken intercom and they were even able to help two of their rivals who got stuck in the mud.

Among bikes and quads Richárd Hodola was the fastest, after yesterday’s leader Károly Heiszer crashed because of a technical issue. Lajos “Laller” Horváth finished second In front of a quad rider from Slovakia, Rudolf Sajan. 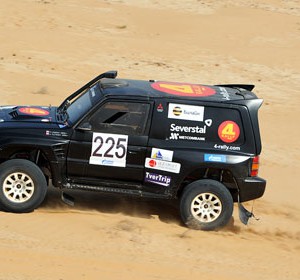 4RALLY will start a sports season 2013 on a rally raid "Gold of Kagan 2013" which will take place in Astrakhan from April...
Copyright 2011-2016 Rallyraid.net - RISE Network. All Right Reserved.
Back to top