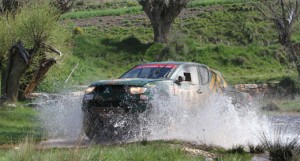 The town of Calamocha hosted the participants of the second round of the Spanish Cross-Country Rally Championship, the Comarca del Jiloca Rally. In Calamocha took place the relevant administrative and technical checks by the stewards. These checks were completed with a report from the Spanish Guardia Civil and two participants were forced to pass the spanish ITV at the nearest station.

The Superspecial of Friday afternoon was held in the recreative area of Barbacán, where Josep Maria Servia won by 12 seconds followed by Francesc Termens. The Portuguese Ricardo Porém finished third with the brad new Evoque Cattiva. 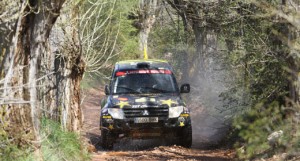 On Saturday at eight o’clock the rally started with a distance of 470.38 kilometers that would test cars and drivers. In the early part of the race the dense fog made a complicated navigation to the first teams, who used the power of their mounts to put distance in between to rivals. Termens and Servià stalking and Porém broke the power steering of his new prototype. Over the miles the struggle between the leading positions focused on Termens, Servia and Recuenco who began with his assault on the top. Behind the problems began for the bulk of the squad. Jose Zaragoza left by transmission problems, Marc Blázquez by an electrical fault, Albert Roquet to break two bearings on the Polaris. 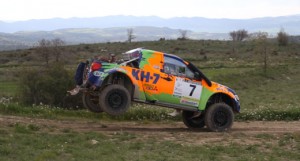 The first round of 235.19 kilometres was won by Luis Recuenco who had taken the lead while Servia and Termens had mechanical problems. Termens’s Mitsubishi Montero was almost without brakes and the Servia’s L200 saw his V8 began to limp, but both were able to keep their podium positions, but without intimidating Recuenco that took and hold the first position finishing almost ten minutes in front of Termens. Behind the trail of dropouts continued, leaving only twelve
teams to finish the race.

In category T2 Jose Luis Iañez win ahead of Alberto Dorsch and in historic category second consecutive victory Miguel A. Domingo in front of the Torrentà brothers. In the lightweight buggies category no crew was able to finish the rally.

Luis J. Recuenco: I am very happy for this victory, we have made a race from less to more and we tried to be as regular as possible, the car has not given us problems and we were able to complete the course without any incident. Nor have we had problems with navigation. This discipline rewards the most regular drivers and more powerful or better prepared car does not always win. Now we are beginning to see the title as a goal since the Almanzora podium and tis victory encourage us to think that if we leave things as before could aspire to the final victory. 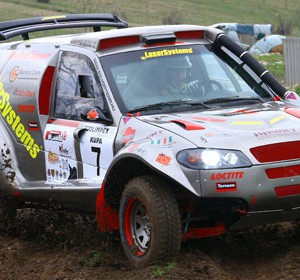 The preparation of HAWKIA for the Céltrans'97 Cup is close to the finish already in Sólyom Team's workshop. After Toolimpex...
Copyright 2011-2016 Rallyraid.net - RISE Network. All Right Reserved.
Back to top