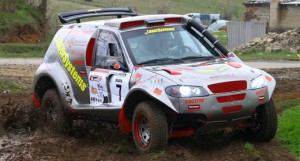 The preparation of HAWKIA for the Céltrans’97 Cup is close to the finish already in Sólyom Team’s workshop. After Toolimpex Cup the team had to manage a list of problems with 73 items among which there were many minor issues but there were also some bigger problems to solve. The race car will be ready for the Himod event already this week.

Olivér Sólyom: “There were lots of things we couldn’t have a look at during the winter. These caused no problem at the first rally but could have caused some at the next round. We replaced all the moving and chafing parts of the drive exterior and of the suspension, and restored and repaired the coil springs. We needed a new exhaust system, and unfortunately we broke both the front and the rear bumper last time. we kept as secret a very important thing but now I can admit it: in Nagykálló our protection plate broke off again – seems like it became a habit of us there – so we had too replace that, too. We had our share of problems, but in some days it will be behind us. In my mind I am already at the rally. We are looking forward to the Céltrans’97 Cup with great excitement and expectance, and we hope that the new organising team will utilise the area better and design more creative tracks than the old organisers.”

Registrations for the mythical Aragonese event are already open, and they stay at a reduced fee until the 14th of June XXXth...
Copyright 2011-2016 Rallyraid.net - RISE Network. All Right Reserved.
Back to top