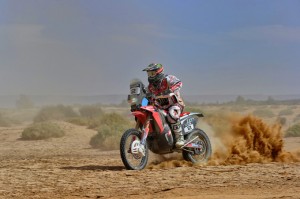 It’s as good a start as it gets for the Honda CRF450 with four wins out of four stages of the OiLibya Morocco Rally. The second half of the OiLibya Morocco Rally was a long and arduous stage, but one of great satisfaction for Team HRC. The move from Zagora to Erfoud brought a fine victory for the team with Paulo Gonçalves winning his second day as well as taking the overall leadership, bringing the Honda CRF450 RALLY tally to four straight wins. In addition Hélder Rodrigues made a return to front with a third place on the day.

Paulo Gonçalves stated that he was very pleased with his performance in the rally, not just for having got through a long and tricky course, but also for getting back on top of the overall leaderboard. The day turned out to be one of heavy navigation, in which the Portuguese rider set off at a great pace in persuit of his main championship rival, crossing the Erfoud finishing line in victorious fashion.

Likewise, his fellow Portuguese TEAM HRC rider Hélder Rodrigues had a smile back on his face after having getting over a couple of eventful days. Hélder took the third fastest time in the special. British rider Sam Sunderland also did well in the special finishing in fifth place after starting out in third.

Joan Barreda started the day well, but lost all the advantage that he had built up over the other riders trying to find a hidden waypoint. In the end the Spanish rider came in seventh place. Argentinian Javier Pizzolito was struck by a similar fate, falling while in search of an obligatory passing point and digging a stone in his right leg. Even so, he was still able to take eighth spot, but will not start tomorrow because the medical staff give not him the permission for safety reason.

Today was a very important and long stage. A lot of dust, rocks, fast track, but in the end it turned out well for me and for the Honda CRF450 RALLY. I won the rally and we are in a great overall position. There’s two days left and you never know what is going to happen. We have to stay really focussed.

There was a lot of navegation today, with potholes and some technical zones. I pushed hard all morning to get to the head of the race. I’m happy with my third place. Marc and Paulo are fighting for the championship but I’m not in the running. I do my job without making any mistakes. I’m happy with the bike; it’s good and fast and the team are really doing well.

It’s been a good stage. I was going really well until the refuelling then I got on the wrong path and couldn’t find the waypoint, so I was forced to go back and make a check. After that I pushed hard to try and catch up with the lads, because Paulo and Coma had overtaken me. I was fast and I think that I did a good job overall. The bike is going really well and I’m very happy.

This fourth stage could have been better, but it was a good day with a lot of tough navegating which I managed well with a good steady pace. I had a hard time finding one of the waypoints when Pablo appeared. After that I made it to the line really pushing hard. I’m pleased overall.

Today was a really complicated stage with some problems with the GPS from the start. I fell in a rocky area, and damaged the bike quite a bit. It came off much worse than it should have for a bump of that size. 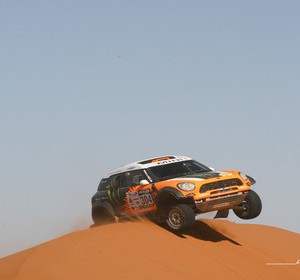 The duo TERRANOVA / FIUZA the Mini X -Raid Team No 304 won the stage, while that of TEN-BRIKE/BAUMEL WEVERS team FORD No. 300 was rolled...
Copyright 2011-2016 Rallyraid.net - RISE Network. All Right Reserved.
Back to top