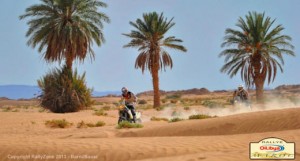 The OiLibya Rally of Morocco Competitors discovered a superb special entitled “On the Trail of the Mummy,” and what a program! 49 km Liaison, followed by 295 km of special and finally a 17 km liaison back to Erfourd . Today, Thursday, September 17th, the OiLibya Rally of Morocco moved a little further north-east into the Moroccan desert. To the delight of the drivers and co- drivers who raced in what was billed as the most beautiful stage of the rally: sand and more sand with lots of navigation and passing by the sets of the 1999 film “The Mummy”.

BIKES: Honda the solid team , and KTM on their guard.
At the top of the motorcycle hierarchy: Paulo GONCALVES HONDA HRC No 2 wins the stage after leaving yesterday’s win to his teammate Joan BARREDA HONDA HRC No. 23. The race is tight. Five Bikes arrived almost ‘ simultaneously yesterday in M’Hamid ,. Unanimously, they agree on the difficulty of this stage. The level of this sport was also significantly higher with the reappearance of several large teams. Add to that, the challenge for a prestigious victory in the OiLibya Rally of Morocco: of the World Cup title and you get an intense but tactical battle.

Joan Barreda after his victory yesterday opened the tracks this morning.

“It was a very difficult stage, mainly because of the navigation. I made a small navigation mistake ‘, and I missed a way point. I had to turn around. I lost some time, of course”.While Barreda has the best time at the first control point, he then slowed down to finish seventh in the ranking lagging 9’37”.

Yesterday Barreda claimed to be ready to sacrifice a ranking position for Paulo Goncalves , if it could allow him to win the World Cup Rally -Raids . He needn’t go that far. For the Portuguese is very strong and very motivated on this OiLybia Rally of Morocco 2013, as he said at the press conference . “Do not forget a title is at stake, it was not an easy day again. Many navigation difficulties and also very technical … But my goal is not the victory in itself, the title of World Champion too … So I ‘m very motivated and I have a unique bike that allows me to express myself. ”

Always the regular, Marc Coma takes a new second place, just 2’26 ” behind Paulo GONCALVES HONDA HRC No 2. But the Spaniard says he has already established his strategy.  The surprise came for the French Yamaha rider, Olivier Pain, Yamaya RACING No 12. He, who led the overall for some time in the last Dakar, takes fourth position of the day. “I had a little trouble the first few days with this new bike, I am putting to the test, but I gradually built confidence and discovered its potential. This is my first race with this bike, it takes some getting used to. I’m just here to improve. ” Olivier Pain, Yamaya RACING No 12

“On Monday I had a problem unwinding my road book and Tuesday I just couldn’t get into the rhythm. Starting on Wednesday was not easy. But this 4th place today is a boost. We are here especially to prepare for the Dakar, but it is also important to be among the first. “

The Brit Sam SUNDERLAND HONDA HRC No 6 completes the top 5 of the day. Overall, GONCALVES takes the lead off BARREDA and COMA staying in ambush. COMA and GONCALVES are vying for the title of World Rallies Champion, with only 3 points in it. All will be decided on the Moroccan soil between the two men.

In the over 450cc Bolivian Juan CARLOS SALVATIERRA on Speedbrain No. 72 wins and ranks 11th in the scratch today. He is also leading the overall in the category.

QUAD: Rafal Sonik leaves not an ounce of chance for his competitors
Rafal Sonik on YAMAHA, No. 200 won his fourth stage of the four contested specials. Camelia Liparoti YAMAHA No 203 finished second, Sébastien SOUDAY on YAMAHA No. 61 is the third. Same order overall in the category.

ENDURO CUP: Philippe Dasse wins
The Frenchman Philippe DASSE on KTM No. 251 won the stage in front of Eric SCHIANO, SHERCO No. 255, and Cedric CHALVIN on KTM n ° 264. These three riders arrived within less than 6 minutes. VAN PELT – JUNIOR dominating so far is fourth, but keeps the lead in the overall classification. The Frenchman bearing No. 270 Vincent Albira on this HONDA wins fourth stage of the OiLibya Rally of Morocco and continues to lead the category overall. 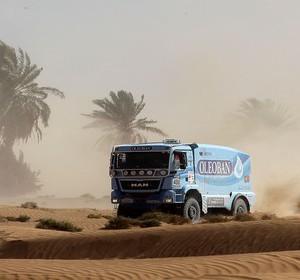 The team OLEOBAN®/MAN Portugal achieved another victory on Rallye Oilibya du Maroc 2013, and is getting closer to winning...
Copyright 2011-2016 Rallyraid.net - RISE Network. All Right Reserved.
Back to top