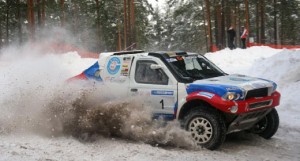 In 2009 and 2010 Baja “Northern Forest” has already been included in FIA calendar when FIA International Cup for Cross Country Bajas was held. The event has been highly praised by international observers. After a two-year break the “Northern Forest” in 2013 was held as a candidate event, and now it back as a part of the world’s top off-road events series.

Cross-Country Rallies World Cup is a multiple-round competition series, held annually in different countries from hot United Arab Emirates, Qatar, Egypt and Morocco in south to the race in Russia – the world’s only snow and ice baja. In 2014 the World Cup will consist of 10 rounds, and each round is the best race in its country.

It’s the first time ever when the World Cup round will be held in Russia. The world’s leading drivers will be able to go through paces on an uncommon for many of them snow and ice surface, and Russian drivers will enter a trial of strength with their international colleagues. 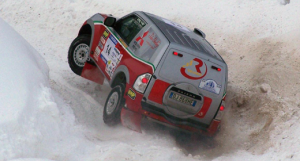 The race starts on Friday, February 14, in 50 kilometers north of St. Petersburg in the popular ski resort “Igora” at 15:00 Moscow time. After a colorful opening ceremony a short 6-km Prologue (Super Special Stage) will be held. This SS will be included into the scoring baja distance as well as it’ll be a qualification stage to determine the starting order for the crews on the second day. Moreover, according to the new rules the first ten Prologue winners will choose their starting positions by themselves at a press conference at 18:30 of the same day.

On Saturday and Sunday (with a night break) the crews will follow the main competition route, which will consist of 400 high-speed kilometers, divided to four special stages (including the Prologue).

On Sunday, February, 16 at 16:00 in “Igora” resort the crews will climb at finish podium. The preliminary results will be announced then and traditional champagne “shower” for the winners a bit later will happen.

The final press conference will be held at 17:00, where Baja “Russia – Northern Forest 2014” winners will answer reporter’s questions, and at 20:00 the awarding ceremony in “Igora” Ice Palace will finalize the event. 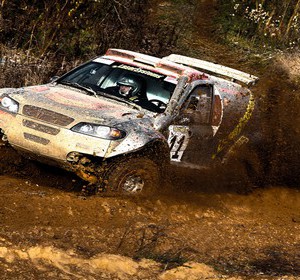 Santa usually dispenses chocolate, candies, maybe birch, but the members of Sólyom Team were so good this year that they...
Copyright 2011-2016 Rallyraid.net - RISE Network. All Right Reserved.
Back to top