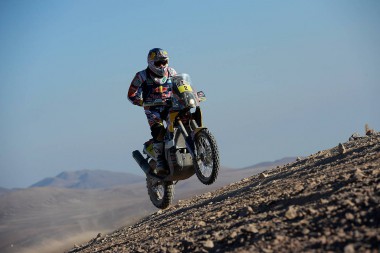 Despite a fall at the beginning of the stage, Marc Coma again demonstrated his status as boss of the Dakar 2014, by picking up his 3rd victory of the year on one of the longest specials of this 36th edition, further reinforcing his position at the top of the general standings. In the car race, the day was marked by the revelation of team instructions by Mini, freezing the leading positions. As a result, Peterhansel eased off the gass, just like Nani Roma and Nasser Al-Attiyah, allowing Orlando Terranova to pick up his first victory on the Dakar 2014.

605km against the clock were on the menu for the competitors on the eleventh stage of the Dakar 2014, which witnessed a new festival from Marc Coma. Fifth to start this morning, the leader of the general standings, though it brought him a fall during the first hour of the stage, attacked throughout the first part before finally tackling the dunes in the wake of Cyril Despres, who moved to opening the way from the very first minutes of the special stage. The two men finished the rest of the stage together and therefore it was only logical that the Catalan recorded the best time of the day, 2’51 ahead of Cyril Despres. Behind this duo, the third best time of the day went to an excellent Olivier Pain, involved in a feisty battle for the final step on the podium with Jordi Viladoms, who in the end only lost around thirty seconds to the French Yamaha rider.

As a result, in the general standings, Marc Coma increases his lead to 52’36 over Joan Barreda, who set off first this morning, but who fell after 250 km of the day’s special, breaking all his navigation instruments, forcing him to finish the special stage just by the naked eye. Thanks to his third best time, Olivier Pain is now within 13’44”of the third step on the podium, which is still occupied by Jordi Viladoms. As for Cyril Despres, he continued his climb back up the general standings and now only trails fifth placed Helder Rodrigues by 43 seconds. 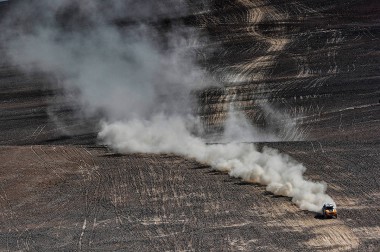 “It’s over! The senior management asked me to slow down. We were more than 40 minutes behind and we came to within 2 minutes… but that’s it!” Even before the start of this eleventh special in the car category, Stéphane Peterhansel revealed that he would not be chasing after the leader of the general standings, Nani Roma, after a decision of the X-Raid management team to freeze the leading positions, remarks which were confirmed several moments later by Nasser Al Attiyah.

The Qatari and the Frenchman therefore contented themselves with taking it easy throughout the day’ special, to the delight of the “outsiders”: Terranova and De Villiers, still fighting for the fourth place in the general standings. In the end, there was a second stage victory on the Dakar for the Argentinean, 10’57” ahead of a still competitive Nani Roma and 12’38” in front of the South African, whilst ‘Peter’ and Al Attiyah finished respectively 14’14” and 20’57” behind ‘Orly’. “The game is over. We’ve had a good laugh and enjoyed ourselves. Yesterday evening, the team asked us to not take any more risks,” declared Stéphane Peterhansel once again, on completion of this eleventh special stage. “It’s a bit frustrating because we’ve done most of the hard work. But, if Mini wants to have three cars on the podium, at the speed at which we are driving out in front, it’s easy to crash a car or even two in just one day. We know that this can happen, but I didn’t think that they would do it”.

As a result, in the general standings, Nani Roma has a bit more breathing space, with a lead that now stands at 5’32” over Peterhansel and 56’01 over Nasser Al Attiyah. Behind them, Orlando Terranova takes fourth place from Giniel De Villiers with a lead of now 12’18” over the South African, putting four Minis in the top 4 of the general standings. 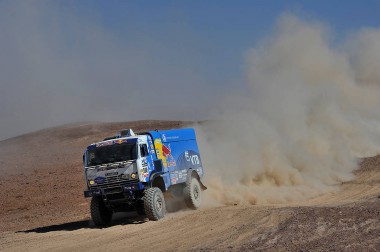 The eleventh stage also witnessed a turning point in the truck race. Taking advantage of terrain that was again favourable to his Kamaz, Andrey Karginov scored his 4th victory in 2014, and 9th on the Dakar, 14’18” ahead of his team-mate Eduard Nikolaev, but more importantly 15’51” in front of Gerard De Rooy, a gap which is sufficient to remove the Dutchman from the top of the general standings where he had been since stage 2. Now just 2 stages from Valparaiso, De Rooy trails Karginov by 7’56”.

Finally, in the quad category the withdrawal of Sergio Lafuente today due to a broken engine after 272 km of the special allows Ignacio Casale to be assured, unless he suffers mechanical problems, of winning the title. Indeed, the Chilean, who won his 6th special stage victory on the Dakar today, 5’12” ahead of Victor Manuel Gallegos Lociz and 19’17” in front of Rafal Sonik, now boasts a lead in the general standings of 1:04’32” over the Polish rider. 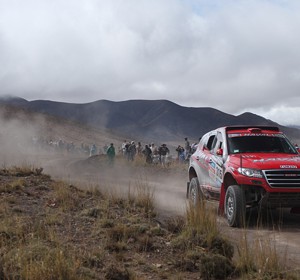 As GWM/Haval team principal, Dong Ming, predicted at the halfway stage of Dakar 2014, the fierce battle at the top of the leader...
Copyright 2011-2016 Rallyraid.net - RISE Network. All Right Reserved.
Back to top