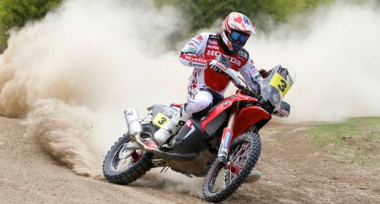 Honda had proved its strength last October with the new CRF450 RALLY, winning both the Morocco Rally and the Merzouga Rally. Thus, the team has taken command of the first stage of the 2014 edition, after 25 years of absence.

It was back on 11th January 1989 when the official Honda HRC savoured victory for the last time. That was when Gilles Lalay took the fifteenth stage of the Paris-Tunisia-Dakar. Now, in the second year back in the event after a 24 year official absence, Joan Barreda has picked up a crucial first stage win on the CRF450 RALLY. After 25 years, Honda are back in the running.

It was a very early start for the Rally Dakar. The pack of riders headed off at four in the morning on a long 405 kilometre liasion that took them towards the vibrant city of Rosario for the start of the 180 km special.

Joan Barreda on the Honda CRF450 RALLY, got off to a storming start in the special, clocking up the fastest time of all the 175 riders at the first time-check, in this, the 2014 edition of the legendary Dakar. He would repeat the same feat at the end of the stage. Team-mate Paulo Gonçalves also kept up a cracking pace, holding on to fifth place at the close.

Joan Barreda: It’s been a great day. I’m really pleased for the first win with Honda, especially for the team that has worked so hard the whole year to produce this new bike. I’m really happy to have begun the Dakar like this. Today was a tough one. Few kilometres, but with a very difficult track full of rocks and very slippery. I managed to get off really well in the second part, keep up a good pace and get a result in the end.

Paulo Goncalves: It’s been a long day, over 800 kilometres and 11 hours on the bike with a very tricky special. Very technical, where I had a lot of difficulties with the bike sliding around a lot. In the second half I quickened the pace and the ride was much better. I’m very pleased for Joan’s victory, which is really good for us.

Sam Sunderland: We’ve finished the first day. A very long special that for us started when we had to get up at 3.00 a.m. More than 800 kilometres and a long liaison too. It was a really intense ride throughout the special. I made a minor error at the beginning and maybe because I changed the settings that punished the rear brake excessively. But in spite of everything, it hasn’t been that bad a stage.

Javier Pizzolito: It has been a hard stage. Being the first stage, I’d have thought that it would be more simple. A very sinuous mountain stage, that was very physically demanding. The bike was very well behaved, so let’s see how we get on in tomorrow’s stage, which should be very different from today’s.

Helder Rodrigues: Today was a very difficult one for me, especially being the first of the Dakar. It was very technical with a lot of bends and you had to be really careful how you handled it. I’m not very happy with the result, but I was able to finish the stage, and you can’t take any risks at the Dakar just for one stage. 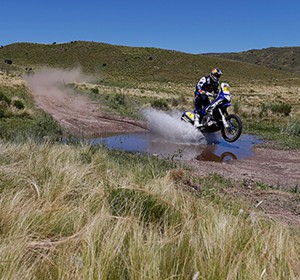 Victory on the first stage of the 2014 Dakar, between San Luis and San Rafael went to Joan Barreda with countryman Marc Coma...
Copyright 2011-2016 Rallyraid.net - RISE Network. All Right Reserved.
Back to top