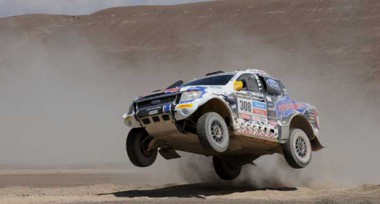 Team Ford Racing’s Lucio Alvarez and Ronnie Graue displayed the speed and strength of their Ranger when they claimed their second consecutive top 10 finish on the longest and toughest stage of the Dakar Rally today.

The Argentine duo finished eighth in the daunting 11th stage from Antofagasta to El Salvador in Chile. The 749 km stage included a marathon 605 km competitive section, the longest unbroken test in the rally.

After a 144 km liaison section, the day’s competition offered pretty much everything the Dakar Rally has in one single test. In temperatures that topped 30°C, dirt roads, mine tracks and dry river beds were an appetiser for 120 km of sand in the arid Atacama Desert, including the famous Copiapo dunes.
After finishing ninth yesterday, Alvarez made the most of an advantageous start position to power the Ranger through the early checkpoints in sixth.

He maintained a strong pace through the afternoon in the sand to come home strongly, despite stopping to change a rear left puncture just 40 km from the finish.

After spending more than six exhausting hours behind the wheel, Alvarez was 35 min 38 sec behind stage winners Orlando Terranova / Paulo Fiuza (MINI). The Ford pilot maintained the recovery from his time loss early in the 9 300km, 14-day event to climb from 28th to 22nd overall.
Such has been the demanding nature of this year’s event that of the 152 cars which departed the Rosario start in Argentina 12 days ago, only 49 started today.

“The car worked well all day. The only occasion in which we lost time was though a puncture near the finish, which, in such a long and hard stage, is fantastic. Another top 10 finish is encouraging and that’s where we should be!

“There were many fast sections with big stones, which were tough for the car, but we cleared them cleanly and safely.

“Physically it was hard too. In the bumps my back suffered but we train all year for this. It was such a long stage that it was hard to maintain concentration. In the slow sections where it’s vital to read the road carefully, you need to forget everything in the mind and focus totally on the road. Then in the fast parts, it’s full attack.”

“We knew this would be the toughest, longest and most stressful day of the rally and the car came through with flying colours. Lucio had absolutely no problems at all which proves the toughness of the Ranger and that’s something we knew all along.

“I was delighted to see the car’s colours come into the bivouac tonight. We know we have a good car and to come through a stage like this with nothing wrong makes the team feel proud.
“We know we need to do some more development work on the car because I don’t think it’s quite where it should be yet. We can improve the engine and we can remove some weight from the car, but that’s the exciting part with the project because there is much more to come.” 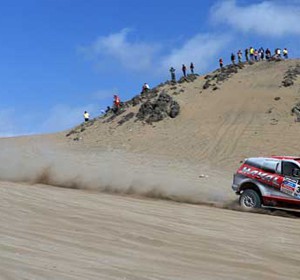 As the 2014 Dakar enters its closing stages, the GWM/Haval team has its sights set on improving, at the very least, to seventh...
Copyright 2011-2016 Rallyraid.net - RISE Network. All Right Reserved.
Back to top