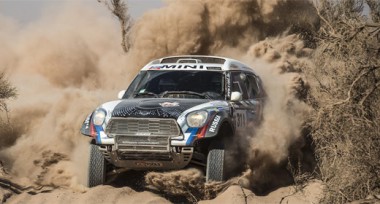 In the interview to VRT (Vasilyev Racing Team) press service Russian pilot Vladimir Vasilyev summed up the results of “Dakar-2014” and told about plans for a new sports season.

Vladimir, have you already managed to analyze the results of “Dakar-2014”? Did you remember any mistakes?

Vladimir Vasilyev: “Dakar” has finished with good result for us. We passed all the distance and finished in “top-10”. At the beginning of the race we had to cope with technical problems which arose not through our fault, but we did our best, did not give up and thanks to work of team director Sven Quandt with our mechanics, the assistance of our car became really perfect. We tried to hold a good speed throughout the rally, but not on a maximum limit as I still learn the car and try to understand its opportunities. I observed and compared as other Mini’s go. For example, on the last special stage there were 7 km of a difficult tracks on the small river with holes and hummocks. I went fast, but other Mini’s were even faster and left forward. It became clear for us where it is necessary to work and push. The car is very good, it is really reliable. About mistakes from my side, probably, only once, when we in a dust didn’t see accurately roadsides and in small slippage hit a stone and broke a nave. Such mistakes are dangerous for the car, so after that case we tried to avoid them even when we had to overtake much. One day we overtook 50 cars!

In your opinion, it was enough sand in a route?

Vladimir Vasilyev: There were less sand than last year, but for me it was enough. Quite difficult dunes were in Argentina where everybody, including leaders, had problems and got stuck, and then got lost after these sand. We passed sands well, without taking off the sand-tracks. Several times we stuck for a little but it was enough to use the hydraulic jacks installed in the car to get out and continue the race. 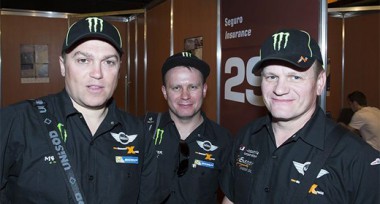 There were many overtaking during this “Dakar” and some drivers appealed to race stewards about use of Sentinel. Tell about your situation with Giniel De Villiers?

Vladimir Vasilyev: It seems like this guy get a “star fever” or simply didn’t go behind someone in the dust. On the finish he told that he was behind us for 100 km and we did not allow him to overtake us. He wrote the complaint to the stewards. When we discussed all together with stewards they asked why there were no Sentinel signals. De Villiers answered, that he was in the dust and couldn’t come closer. If so, how then I had to understand that he was behind me? Once when I heard the Sentinel I reduced speed and allowed to overtake, but he didn’t appear. It would be useful for him to start from 70th or lower position and there he could understand all. Several times we followed by someone in the dust for a long distance. One day we caught up Van Loon and he did not want to pass us. Then Sainz and Al-Attiyah caught up and all together we finished on the first part of special. On neutralization section they agreed that Van Loon to pass them and asked us the same.

You participated in a “team play”, whether there were any instructions to your crew?

Vladimir Vasilyev: The team play was only for four crews of professional staff – Terranova, Roma, Peterhansel and Holowczyc. They had to follow team instructions. We went in our mode.

How the team and Sven Quandt estimated your result?

Vladimir Vasilyev: We had no time to talk a lot. He asked me: “How do I feel myself on the finish?”. I answered: “Everything is ok. The program to be in top-10 is done”. We both agreed that for next year we can strive for the best result. We have the whole year for trainings, within the FIA World Cup calendar. Many races in the World Cup are important for training before Dakar. For example, Abu Dhabi, excellent sandy race and the others.

That means that your plan for a season 2014 is participation in the FIA World Cup?

Vladimir Vasilyev: Yes, FIA World Cup and “Dakar-2015”. Concerning the Russian races, I can attend only some of them, like Baja Russia, Silk Way Rally, depending on my work schedule.

Who will be your co-driver for this season?

Vladimir Vasilyev: I decided to work with Konstantin Zhiltsov. He has an extensive international experience and knowledge not only as a co-driver, but as a driver, so he can help me to improve my level in sands and dunes. Our main goal is to fight for the World Cup title and we need to be perfect. On this “Dakar” there were more fast tracks and not complicated navigation, but I saw that Kostya helped a lot to Holowczyc in dunes. 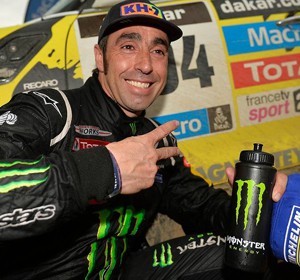