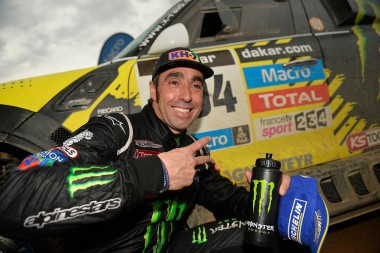 The toughest Dakar held in South America, with just 204 vehicles (78 motorcycles, 15 quads, 61 cars and 50 trucks, or 47% of those that started) making it to the finish, was dyed in the red and yellow colours of Catalonia. With Marc Coma and Jordi Viladoms taking the top two places in the motorcycle category and Nani Roma winning in a car race ten years to the day after doing so on a motorcycle, the Catalan contingent blew the competition away in the 2014 edition. Behind the two KTM riders, Frenchman Olivier Pain rounded off the podium after fending off the late attacks of his leader, Cyril Despres. In the car category, Nani Roma topped the Mini 1-2-3 with a narrow 5′38″ margin over Peterhansel, becoming the third competitor to win in a car after triumphing on a motorcycle. 26-year-old Ignacio Casale also put his name on the prestigious list of winners, as the young quad rider took a home win that will surely earn him a thunderous ovation on the podium in Valparaíso. In the truck category, Russian Andrey Karginov held on to his lead over Gerard de Rooy by a hair’s breadth.

Last year, leader Cyril Despres and his lieutenant Ruben Faria signed an amazing one-two for the KTM squad. It was with the same team spirit that Marc Coma grabbed his fourth overall win, escorted on the podium by his faithful lieutenant Jordi Viladoms, who had already stood at his side when he won in 2006 in 2009. Coma’s strategy, based on building an insurmountable lead over his rivals in one single special, has changed little since his last victory in 2011. This time round, it was during the fourth day of racing, the second part of the marathon stage to Chilecito, that the comeback kid dealt a devastating blow by toppling Joan Barreda from the lead, while electronic problems scuttled Cyril Despres’ chances of victory. From then on, Coma focused on avoiding mistakes, while his rivals suffered more and more mishaps, mechanicals and errors… costing them hours in the overall. 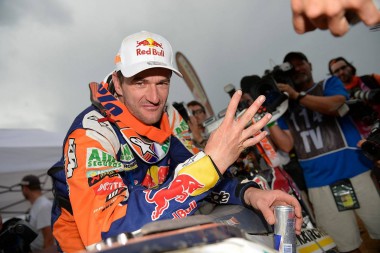 The first two riders to drop out were those who stood next to Despres on last year’s podium, Ruben Faria and “Chaleco” López, who were knocked out by falls. Later on, during stage 5, world champion Paolo Gonçalves saw both his Honda and his hopes go up in flames. At the time, a breath of fresh air from the Sherco camp compensated for all these disappointments. After alternating with teammate Juan Pedrero in the top places of the stages, Alain Duclos looked more and more like a serious podium contender, at least until the rest day. However, his Sherco’s engine gave in during stage 9 after a first scare two days earlier. Marc Coma was able to spend the last few days riding at his own pace and keeping an eye on distant pursuer Joan Barreda. However, after climbing back to within half an hour of Coma due to the leader being handed down a penalty for an engine change, Barreda blew it exactly when it looked like he had finally learned to be consistent. The animator of this year’s edition and winner of five stages crumbled on the dunes of Copiapó the day before the finish, conceding over two hours and slipping to seventh overall.

Meanwhile, Cyril Despres continued Operation Comeback, gaining a few places in the classification for his troubles. The five-time winner, 12th at the end of stage 5 and 11th on the rest day, inched closer and closer to the top until he finished at the gates of the podium, just behind teammate Olivier Pain. Yamaha’s one-two in the third and fourth places is followed by an honourable Honda contingent, with Hélder Rodrigues in fifth, Joan Barreda in seventh and Daniel Gouet in eighth. Laia Sanz put the cherry on the Catalan take with a decent sixteenth place, one of the best results achieved by a female rider at the Dakar, after Christine Martin’s tenth place in 1981, Nicole Maitrot’s fourteenth in 1982 and Véronique Anquetil’s fifteenth in 1984.

A “different” edition in the car category

The 36th edition of the biggest rally raid in the world started with a surprise, as Portugal’s Carlos Sousa grabbed his sixth Dakar win and the first for Chinese manufacturer Haval. The overall winner’s name was anybody’s guess until the thirteenth and final special. The impressive performances of the SMG buggy driven by Carlos Sainz, who won two specials and led the overall after stage 4 but was forced to go home after a silly crash in the link section of stage 10; Giniel de Villiers, as consistent as ever, becoming the only driver able to take the fight to the Minis until the very end; and the controversy generated by X-raid’s team orders for the last three days; the 2014 Dakar will go down in history as a unique edition!

At the end, almost as expected, it was a Mini festival, with five of its eleven cars in the top 6, including a podium whitewash, and all eleven cars making it to Valparaíso. Outstanding technical expertise combined with a wobbly race management. Before Nani Roma could savour his first Dakar win in a car, a decade after taking the motorcycle race (becoming the third competitor in history to accomplish this feat, after Hubert Auriol and Stéphane Peterhansel), the Spaniard had to show nerves of steel as the team orders issued by Sven Quandt the evening after Antofagasta were trampled upon the next day, only for everything to fall back into place the last day.

The team orders controversy and the group finish of the leading Minis in the last stage, handing the overall win to Nani Roma on a platter, put an asterisk next to the first car victory of the 41-year-old Catalan, who had nevertheless produced a masterful performance during ten stages before cracking under the pressure of a Stéphane Peterhansel firing on all cylinders the last few days. “Monsieur Dakar”, driving as consistently as ever but with a fire in his belly rarely seen until now, wrote a new chapter in his legend during the 2014 edition, one he finished in second place, 5′38″ down, but with an unsurpassed total of four stage wins that propelled him to the top of the all-time record, with 65 victories. Nasser Al-Attiyah, isolated in third place, took his third Dakar podium, but he will long regret failing to find all the waypoints in stage 10. The resulting penalty may have cost him his second overall win, as he finished 56′52″ behind the champion. Finally, South African Giniel de Villiers was the only driver to take the fight to the Mini armada all the way to Valparaíso, winning the last stage and consolidating his fourth place overall, which is also his seventh top 5 finish in ten participations!

Further behind, a special mention goes to Pole Marek Dąbrowski, who rounded off his first start in a car with an excellent seventh place, and Christian Lavieille, who gave Haval a top 10 place for the second year straight. Finally, in the production series category, Japanese Jun Mitsuhashi took his third win in this class, while Frenchman Eric Bernard won the solo category after finishing 23rd overall.

Ignacio Casale takes the quad race! The evening after stage 2, the defending champion summed up the ferocious battle raging in the quad race. “The Dakar’s just begun”, said Marcos Patronelli after winning the stage and moving into the overall lead. Ignacio Casale had seized the lead in both classifications at the end of the preceding stage, from Rosario to San Luis. The Argentinean star dropped out the next day during the hottest stage in Dakar history, probably as a result of his high-intensity clash with the Chilean. The quad race is getting more and more competitive, as proven by the fact that Casale still had to see off the repeated onslaught of Rafał Sonik and Sergio Lafuente. The Pole slowly run out of steam when faced with the leader’s robust defence, while the Uruguayan had to go home after his engine broke down during stage 11. Casale only wrapped up his Chilean-style win towards the end of a rally that revealed Sebastian Husseini’s fighting spirit. The Dutchman was rewarded with the bottom step of the podium. Qatari Mohammed Abu-Issa took fourth place, with promising rookie Víctor Gallegos rounding off the top 5. Franco-Italian Camelia Liparoti played her hand well again, finishing 13th out of 15 finishers and 40 starters.

Finally, the clash of titans between Iveco and Kamaz will have been a close one until the very end. Although the Russian team seized the overall lead from the get-go with Ayrat Mardeev and was still in the pole position with Andrey Karginov twelve stages later as the race came Valparaíso, the outcome of the 36th Dakar was full of suspense, reminiscent of some of the memorable battles seen in the motorcycle and quad categories over the last few years. Kamaz’s Andrey Karginov seemed set to take a win earned on the Chilean sands, but one obstacle blocked his way in the last special. Car no. 319 swerved and ended up stuck on the track of the last timed sector, just in front of the Russian, who lost 10 minutes. Meanwhile, his closest pursuer and winner of the previous stage Gerard de Rooy used his starting order to slip ahead. All in all, Karginov lost 9′34″ to the Dutchman. However, race officials deducted 5′20″ from the time of the no. 306 Kamaz, handing Russia’s Andrey Karginov his first Dakar win by 3′11″ over Gerard de Rooy. Behind them, the other Kamazes hogged places 3 to 5, with defending champion Eduard Nikolaev, Dmitry Sotnikov and Anton Shibalov. It is a pity that this awesome edition had to go without the fireworks of Pieter Versluis, Martin Kolomý and Ayrat Mardeev, who had to drop out in stages 10, 9 and 3, respectively, while Aleš Loprais’ Dakar was a mixed bag, with the Czech driver finishing in sixth place, over five hours off the pace. 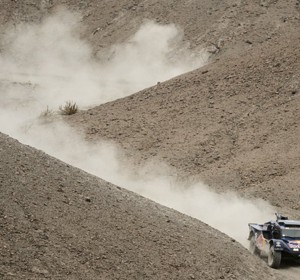 The Frenchmen record another top 10 stage finish before taking a special guest on a co-drive over the dunes. The latest...
Copyright 2011-2016 Rallyraid.net - RISE Network. All Right Reserved.
Back to top