Robby Gordon Wins Round 1 of SPEED Energy Formula Off-Road Presented by Traxxas At the Grand Prix of St. Petersburg 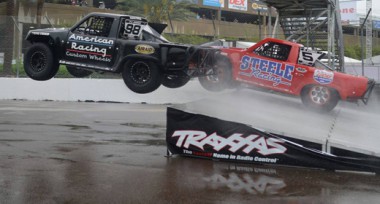 Robby Gordon won a rain-soaked and water-logged SPEED Energy Formula Off-Road Presented by Traxxas race at the Grand Prix of St. Petersburg Saturday, calling it the worst weather conditions he has ever competed in over a more than 30-year career.

The race was literally anyone’s to win from start to finish of the 10-lap event, with all the trucks experiencing issues with the standing water on the temporary circuit that makes up the 14-turn 1.8-mile course built for IndyCars. Gordon, Lofton and PJ Jones battled for the lead throughout the race, trading it among each other as the others spun out in the wet conditions.

Brooks, who raced with a conservative style, managing to stay in touch with the leaders and wait for the front runners to eliminate themselves in the wet. Lofton, who led with just more than one lap remaining, spun for the second time in the race at the 90-degree right hand Turn 1 which allowed Gordon to take the lead which he would not relinquish.

“That was a lot of fun, but it was probably the slipperiest conditions I have ever raced in,” said Gordon who is also the founder of Formula Off-Road Presented by Traxxas. “I have to thank IndyCar and the Green Savoree team (promoters of the Grand Prix of St. Petersburg) for allowing us to race here in front of so many great race fans. It was a really good race despite the rain and we’re looking forward to putting on another good show tomorrow (Sunday).

The series will run its second round Sunday at 2 p.m., immediately preceding the IndyCar season opener.

Round 2 of the second season of SPEED Energy Formula Off-Road Presented by Traxxas is scheduled for 2 p.m. Sunday when nine identically prepared trucks participate in the first race of the 2014 season.

Starting lineup determined by each driver’s fastest lap, with a blind draw of numbers that determined the top three rows would be inverted. 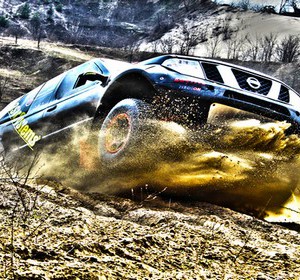 Last weekend the crew Sólyom – Galbács was finally able to test their new HAWKING. As the goal was not discovering the end speed,...
Copyright 2011-2016 Rallyraid.net - RISE Network. All Right Reserved.
Back to top