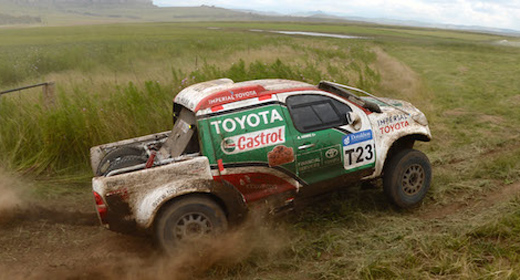 Winners of round one of the Donaldson Cross Country Championship, Anthony Taylor and Denis Murphy, are ready to tackle new terrain on their home event, the Toyota Dealer 450. This race was previously based near Eston in Kwazulu/Natal, but will this year be contested on the outskirts of Mooi River instead.

“We can’t wait to get out there,” says Taylor, “it is always exciting to race in a new area, and the terrain around Mooi River promises to be exhilirating.”

For newcomers to the Castrol Team Toyota cross country team, Leeroy Poulter and navigator Rob Howie, round two offers a chance to build on their thrilling start to the season. The pair brought their Toyota Hilux home in second place on Round One in Harrismith, finishing 10 minutes behind their team mates.

“A second place on our first outing was simply amazing,” reckons Poulter. “But to see our teammates take the victory was just as sweet.”

Add to this a recent one-two finish on round one of the South African National Rally Championship – where Poulter and co-driver Elvéne Coetzee took a maiden win in the Toyota Yaris S2000 rally car, with new teammate Hergen Fekken and navigator Carolyn Swan finishing second – and it is clear that Castrol Team Toyota has reason to look forward to the Toyota Dealer 450.

“We are overjoyed by the results so far this season,” says Team Principal Glyn Hall. “We can only hope for another solid performance in Mooi River, especially since this is our home event.”

According to Hall, new events may be exciting due to the new terrain, but it also means teams don’t know what to expect on a technical level. “The unknown terrain will certainly add some anxiety,” says Hall. “But at the same time we are starting our test programme for the Hilux on this event, so we’ll have a lot on our plates.”

The Toyota Dealer 450 kicks off at 11:30 on April 4th, with a 100 km qualifying event to determine the start positions for the race. The main race starts at 08:30 on Saturday, April 5th, and consists of two 175 km-long loops. As is customary on Cross Country races in South Africa, there will be a compulsory 15 minute break after the first loop.

The Designated Service Park (DSP) and race HQ will be situated at the Weston Agricultural College, and there are seven specatator points marked along the route. 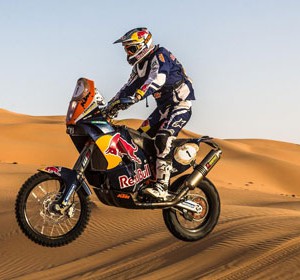 Spain’s Nani Roma will defend his drivers’ title in the Abu Dhabi Desert Challenge POWERED BY Nissan next month as fellow-countryman...
Copyright 2011-2016 Rallyraid.net - RISE Network. All Right Reserved.
Back to top