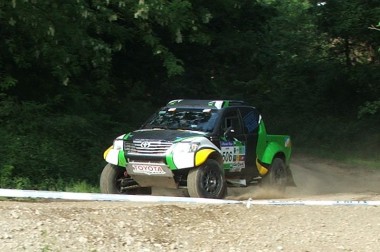 After a day without problems Imre Fodor and Attila Csató occupies the 3rd place at Riverside Baja, 2nd round of the Hungarian Championship.

On Saturday the teams joined the field of Bükfürdő Rally and competed nine specials on the short (10 km, 11km and 7 km) tracks of the classic rally event. The reigning champions, Imre Fodor and Attila Csató chose to run cautiously on the tracks that were not really favourable for their car but despite this they occupy the 3rd place in the overall classification with a gap of a mere 59 seconds.

“I had no problem with the rally tracks and we are happy with the result. The gaps are very small, just as we expected for today. We haven’t raced since the end of the last season, the car is brand new, we received it only on the day before the rally, taking this into account our performance is alright. We didn’t want to take any unnecessary risks, today was not about that. I think Sunday will be more favourable for us, and then we’ll push much harder,” says Fodor.

As their new car hasn’t arrived yet, Fodor and Csató drive a rented Toyota Hilux at the event. “The engine and the gearbox is different from our old car, but it’s fantastic. The setup is great, we’d like to say thanks to the engineers for that,” – the driver added.

On Sunday the competitors return to the cross-country rally tracks and complete a 51 km track four times. As the gaps in the front are really small (the first six cars are within 2 minutes) a fierce battle can be expected on the last race day of Riverside Baja which will close with a prizegiving ceremony at 6 pm in Beled. 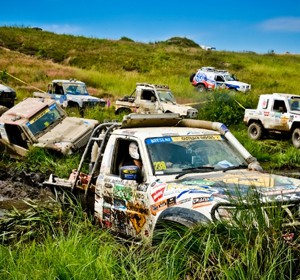 Lazer Lamps is pleased to announce its sponsorship of the 2014 Rallye Breslau International, the biggest European amateur...
Copyright 2011-2016 Rallyraid.net - RISE Network. All Right Reserved.
Back to top