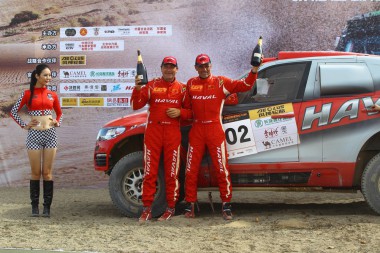 After a long journey all the way from the foot of the great wall of China in Beijing to Dunhuang in the Gansu province, Christian Lavieille and Jean-Pierre Garcin are the winners of the second edition of the China Grand Rally. In the motorcycle category, Wen Min Su on his Jincheng is the winner, effectively becoming the successor of last years winner, Pablo Pascual.

Under the eyes of a member of the International Automobile federation the China Grand Rally competitors faced off against each other today in a final short and rapid 2km stage around the bivouac in Dunhuang. After the stage, each vehicle had an allotted time on the podium  where traditional champagne ceremony awaited them. Christian Lavieille and Jean-Pierre Garcin were at the forefront of the rolling column of vehicles, finally able to claim their victory at the China Grand Rally 2014.

With seven victories in hand, the French duo delivered a flawless racing performance today. Their Haval teammates Wei Han and Cheng Feng came in second overall. After having won two victories in central Mongolia, their excellent driving there cast doubts on the certainty of the French duo’s ultimate victory.

Miao Ma in his Nissam M05 comes in third, a marvelous result in the eyes of the men who prepared the vehicle: Richard Morel and Adrien Favarel of Team Dessoude. They would have been extremely pleased with such a result at the beginning of the rally. Last year’s victor Zhou Yong did not make it to the top and leaves the China Grand Rally listed at the bottom of the podium. The time he required to get used to his new Toyota Pick Up Overdrive’s handling cost him too much time, thereby effectively dashing his chances of finishing at the top. The other French team featuring Philippe Raud and Eric Simonin on their Landcruiser finish almost among the top 10. Benefiting from the structure of Haval, the two friends finish eleventh and seem inspired to achieve an even better result in the China Grand Rally 2015.

In the motorcycle category, Wen Min Su wins the China Grand Rally 2014 despite an angle injury. Following his severe crash, the man knew how to manage the time advantage he had arduously gained over his competitors since the first stage in Hangjinqi. His great performance and boundless ambition enabled him to dominate his competitors and thus he always finished first or second in all of the rally’s races. Zhou Tian on is Jincheng comes in second overall, ahead of the two Honda racers Shi Yumeng and Yirong Wan, who came in third and fourth respectively. Overall a great success, similar to that of Gérard Anthony “Atelier du Désert” who in the China Grand Rally 2013 edition had both of his competitors occupying first and second place on the glorious podium.

Aidong Hu maintains his title in the quad bike category. The pilot, oft prone to mood swings, did not win any races this year, however, he did deliver great performances, regularly defeating his competitors on motorcycles.

After the taking of many pictures as souvenirs and their sharing of the many adventures and challenges they faced, the competitors of the China Grand Rally 2014 made their way to the awards ceremony. All the winners of each category were called up to the stage and given their prize. These last few moments shared between competitors, volunteers and organizers marked the end of a great China Grand Rally 2014.

What they said :
Christian Lavieille (Haval – number  102) – Winner of the China Grand Rally 2014 : “I am extremely pleased with this victory. I would like to thank the organizers, the Chinese federation and especially Haval for all the support they offered us over the past two weeks. The setting here is great. One can find everything here that is required to create a large international rally raid.”

Jean-Pierre Garcin (Haval – number  102) – Winner of the China Grand Rally 2014 : “I was not expecting this… the races of the rally were well marked and very diverse. Even though the stages were relatively short this year, we were able to explore all kinds of terrains one could cross in a rally raid in only 200km! I take this opportunity to thank Haval who created a perfect environment for us to win the China Grand Rally 2014.”

Philippe Raud (Toyota Landcruiser – number  135) – 11th in general ranking : “There is great potential here, I was really surprised at the quality of the setting. When I see the type of vehicles that finished ahead of us in general ranking, I think we did a good job with our serial vehicle.”

Eric Simonin (Toyota Landcruiser – number  135) – 11th in general ranking : “This is the second time I have participated in the China Grand Rally and I see great progress being made, especially within the organization! The reception in particular. The Chinese know how to welcome people. It is too bad there were not more foreign competitors, 20 or 30 European competitors here would be awesome!” 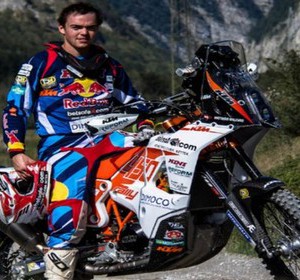 Austria’s Matthias Walkner, the 2012 MX3 World Champion has been named as the latest member of the KTM Rally Factory Racing...
Copyright 2011-2016 Rallyraid.net - RISE Network. All Right Reserved.
Back to top