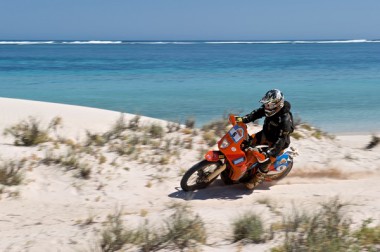 For the last Dakar Challenge event of 2014, Ian Blythe travelled from the USA to Australia to win his ticket to participate in the Dakar. He completes the list of the 13 newcomers on whom to keep a watchful eye on the tracks of Argentina, Bolivia and Chile.

Sometimes the future is played out in the present. Every year, the Dakar Challenge holds impressive surprises in store by selecting the winners capable of distinguishing themselves on the tracks of the main event in January. It may just turn out that the small team of this year’s “challengers” could again be capable of springing a surprise. In any case, this is the impression given in light of the performance by the winner of the last ticket, which was won on completion of the 3,500 kilometres of the Australasian Safari. For those in the know, Ian Blythe is already one of the bikers to watch over the last several years, after having posted the best time in the juniors on the Mexico Six Day Enduro (ISDE) in 2010. Since then, the American adventurer has honed his riding style all over the world, with the certainty of moving on from endurance racing to rally-raid in the near future.

Everything came to fruition in the last few weeks for the rider from Colorado, who decided to sign up for the Australasian Safari especially to try and win a pass to the Dakar. On the quick tracks of Western Australia, Blythe quickly set himself apart from the pretenders to the Dakar Challenge crown, but still had a fright on the last two days of the race which he had to tackle with a fifth gear that would not work! “It would have been difficult to accept if, over those last two stages I’d lost the three hour lead that I built up,” explained afterwards the winner of the Dakar Challenge, who more significantly made it onto the podium for the event behind two regulars in the leading places on the Dakar: Rodney Fagotter (14th on the Dakar 2013) and Quinn Cody (9th on the Dakar 2011). For Blythe, a first mission is accomplished, but now he will have to do his utmost to show that he is capable of tackling the main event in a little more than three months’ time: “I came to Australia with the sole aim of winning my place on the Dakar. Now I’m going on a training camp with Quinn Cody in California, because I’m still relatively new to riding in the desert. What’s more, I need to get used to navigating, because events with road-books are rare in North America”. 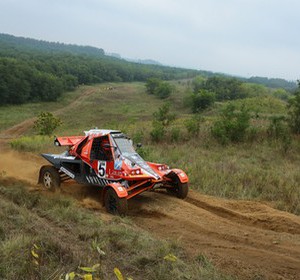 Zoltán Hangodi and the Klement Mosquito held fifth position at Adrenalin Cup for a long time, but in the penultimate special...
Copyright 2011-2016 Rallyraid.net - RISE Network. All Right Reserved.
Back to top