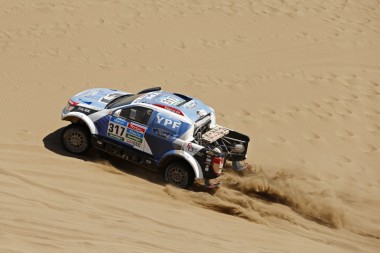 The YPF Competicion Ford Ranger pairing of Federico Villagra and Andrés Memi found a safe and sensible pace and rhythm on the seventh special stage of the 2015 Dakar Rally, held across the Bolivian high plateau, on Saturday afternoon.

They finished the first half of the Marathon stage in an unofficial 21st position after passing several cars on the special. They will carry out routine maintenance work on their Ford Ranger at the overnight halt in Uyuni without service support.

“Yesterday was another hard day on the Dakar,” said Villagra before the start of the Marathon stage into Bolivia. “It was very demanding and dangerous at times to pass so many cars after our electrical problems two days before. Now we are going to be totally alone for two days on the stages in Bolivia. I just wanted to make sure that we make ourselves our own assistance with the materials that we carry in the Ranger. There will be no room for error over the next two days.”

Before first light, only 80 cars began the first half of the Marathon stage and climbed to over 3,500 metres to cross the frontier into Bolivia. The 392km liaison guided teams through the Pampa Del Tamarugal National Reserve and across the spine of the Andes.

After the 321km special stage, a short liaison of four kilometres steered the cars into the camp in Uyuni. Many kilometres of the stage would take place at altitudes well over 3,700 metres on the high Bolivian plateau. 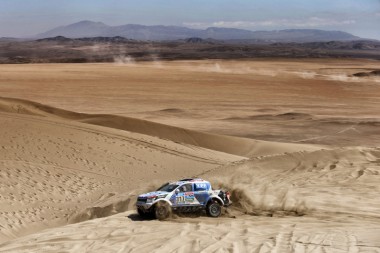 illagra was seeded at 42 on the road and slipped three places to 42nd overall at the start of the day after incurring a 40-minute time penalty for missing a route waypoint. The stage was riddled with muddy puddles and damp conditions, but the Argentine found a good rhythm nonetheless and was running in 20th position for much of the first half of the special. He reached the finish in a time of 4hrs 09min 33sec to record the 21st quickest time.

Qatar’s Nasser Saleh Al-Attiyah began the day with an overall advantage over Giniel de Villiers of 11min 12sec, but the South African managed to catch his rival on the plateau and reduced the 2011 event winner’s lead by 2min 58sec to 8min 14sec in Uyuni. Argentina’s Orlando Terranova claimed his third stage win of the event so far.

South Racing is looking after Villagra’s on-event logistics and day-to-day management under the directorship of the experienced Scott Abraham and his team. Villagra’s Ford Ranger was prepared and developed in South Africa by Neil Woolridge Motorsport.

“Seven stages of this very difficult edition of the Dakar Rally have passed and we have been very pleased with the performance of both Federico and the Ford Ranger,” said Abraham. “We, as a team, are confident that we will finally achieve a good result.”

Tomorrow (Sunday, January 11), features the second half of the Marathon stage from Uyuni in Bolivia and back across the border into Chile where there will be another night halt and subsequent rest day in Iquique. It’s a long day by Dakar standards and features a competitive section of 781km, including a 24km liaison and over 100km crossing the Salar de Uyuni (vast white salt flats).

Race officials have warned that the stage then becomes more technical and offers many kilometres of treacherous mountain terrain and around 40km of sand dunes to the finish. 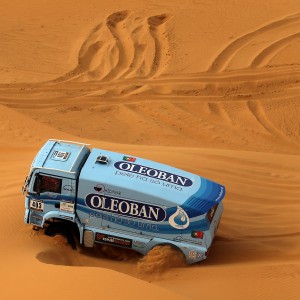 At a time when it is only lacking to fulfil the mythical journey of Lac Rose, the Portuguese pilot Elisabete Jacinto held...
Copyright 2011-2016 Rallyraid.net - RISE Network. All Right Reserved.
Back to top