Although the results doesn’t suggest so, The prologue of Duna Aszfalt Cup was adventurous for Imre Fodor and his new co-driver Gergely Vass. The crew was fastest despite a broken intercom that made communication between driver and co-driver almost impossible.

Hungarian championship season started on Friday afternoon with Duna Aszfalt Cup’s 12 km prologue. In the rally held in Bugac a big and strong field gathered for the first round of the OpenHungarian Championship and second round of the Central European Zone Championship (CEZ).

Imre Fodor started the season with a new co-driver, Gergely Vass, a young but experienced rally co-driver, for whom this is the first race in cross-country rallies. The start was anything but easy: the intercom broke down, so the co-driver had to instruct his driver with hand gestures. The “pantomime” was so effective that Fodor finally clocked the fastest time with their Foord Ranger. In the service park mechanics managed to find and repair the problem, so the crew will be able to start in Saturday’s long specials in a perfect car.

“The track itself was fantastic, the organisation and the atmosphere are also great, but we had a minor technical problem: the intercom broke down. Apart from this, prologue went well for us, we hold a lead of 4 seconds, but as the superspecial was so short compared to the distence we cover in the next two days, this result is vital only because we can choose our starting position for Saturday. This race will be decided on tomorrow’s 200 kilometres, there are many great drivers here, in good cars – anything can happen,” Fodor said.

On Saturday two 110 km long specials near Bugac are on the schedule of Duna Aszfalt Cup, followed by another 94 km on Sunday. 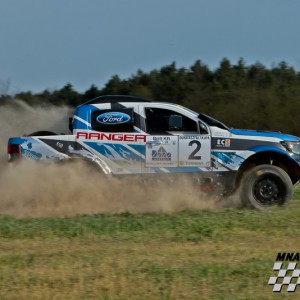 Imre Fodor Was fastest in Friday’s prologue at Duna Aszfalt Cup, followed by Antal Fekete and Marcin Lukaszewski, who clocked...
Copyright 2011-2016 Rallyraid.net - RISE Network. All Right Reserved.
Back to top