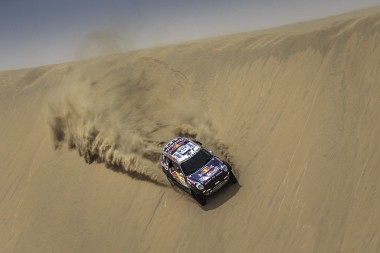 A dominant drive from start to finish has seen Nasser Al-Attiyah and Mathieu Baumel retain their crown at the Sealine Cross-Country Rally in Qatar. The pair were enthusiastically cheered home at the conclusion of the contest as local hero Nasser put on yet another masterclass over the dunes.

The Qatar Rally Team duo were able to make a real statement of intent on the first 202km timed special stage. Amid hot and windy conditions Nasser and Mathieu won the stage to open up a gap of three and a half minutes over their nearest rival.

The impressive opening day result was just a preview of the speed Nasser was to show over the next two days of racing as he and co-driver Mathieu set about building an unassailable lead. Another stage win on the second day of the Sealine Rally saw the Qatar Rally Team’s lead standing at over 13 minutes before the pair put themselves out of sight the following day.

A third consecutive stage win was secured over a 392km route while temperatures climbed into the high thirties. With impressive pace maintained over the dunes Nasser and Mathieu arrived back in the bivouac with a lead of over 22 minutes from second placed Yazeed Al-Rajhi after three days of racing.

A conservative speed, dictated by a trio of punctures picked along the rocky road, was on show during the fourth stage before Nasser and Mathieu finished in style on the fifth and final stage of the Sealine Rally. The desert racing duo ended up steering their Mini All4 Racing through a total of 1,750km of rugged terrain before concluding the race with a comfortable cushion of nearly 30 minutes over their closest competitor.

This latest win sees the Qatar Rally Team build on their high-speed start to 2015 as they continue a sequence of being the fastest car in all six of the races they have entered this year. This remarkable run of results stretches back to the Dakar Rally in January and encompasses WRC2, FIA Cross-Country Rally World Cup and Middle East Rally Championship events.

Nasser and Mathieu’s next appointment with the dunes will be at the Pharaons International Cross-Country Rally in Egypt next month, May 12-16.

Nasser Al-Attiyah: “We were really pushing on the first three days, but all the while taking the minimum amount of risks. Before each stage we’d give ourselves a target of what we wanted to achieve and what would be a good result on that day. This strategy allowed us to grow our lead day by day until it reached over 20 minutes by the end of the third stage. When we reached that point we felt comfortable that we had done enough to win this race. So this changed the strategy for the final two days where we were happy to just follow the cars leading those stages. It was the same tactic at the Dakar so while it is working for us there is no rush to find an alternative plan.”

“There will be a big celebration here tonight with lots of friends because it is always a special feeling to win in your own country. From the car I’ve been seeing a lot of happy people cheering us onto the finish line so I’m going to enjoy joining in with the celebrations.”

Mathieu Baumel: “I wasn’t feeling any extra pressure to defend our title here at the Sealine Rally. Nasser and myself have been racing a lot this year, more or less every two weeks, so there’s not really much time to think about anything other than the job you have to do. The spirit in the team is really good right now and we’re working without stress. My approach to the job has not changed. As always I try to prepare well to help us have the best chance possible of getting the result we want.”

“I knew it was important for Nasser to win here because it is his home event, it would not be good to be beaten in your own backyard. We were focused for the entire race because with so much stoney ground mistakes can happen easily. You need to manage the jumps, the dunes, the camel grass and all the other sections that can create punctures and problems. In this respect Nasser was able to help with the navigation because he knows the place so well.” 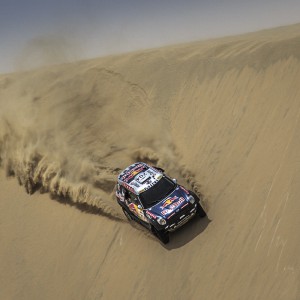 A challenging Sealine Cross-Country Rally course in Qatar has been conquered by the Red Bull Desert Wings squad with victories...
Copyright 2011-2016 Rallyraid.net - RISE Network. All Right Reserved.
Back to top