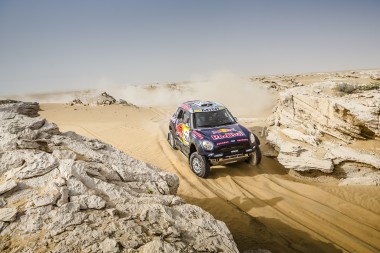 Just a few weeks after the success in the Abu Dhabi Desert Challenge, the MINI ALL4 Racing once again delivered in outstanding style, with Nasser Al-Attiyah and Mathieu Baumel winning Qatar’s Sealine Cross Country Rally, in their X-raid built racer. Second place also was secured by a MINI ALL4 Racing pairing: the Russians Vladimir Vasilyev and Konstantin Zhiltsov. Meanwhile, the Poles Adam Malysz / Rafal Marton contested their only second rally with the MINI ALL4 Racing and secured the fine sixth place.

The rally in Qatar featured two major challenges: a huge dune field and a flat terrain with a lot of stones. Particularly in the flat areas, the drivers opted for a conservative approach to avoid any punctures. Al-Attiyah had to cope with the additional difficulty that he was the one who had to go out first, in three of the special stages that featured extremely difficult navigation. “We drove extremely careful, in these sections, as we didn’t want to get lost. Then, in the dunes, we pushed to re-increase our lead,” reveals Al-Attiyah. “But our main goal was to avoid punctures.” And so, at least three of the rally cars from Trebur made it to the top five in every stage – although they also didn’t survive the event without encountering any damaged tyres.

On his home terrain, Al-Attiyah once again proved to be invincible and won three of the five special stages. In the fourth special stage he lost some time due to three tyre damages and had to settle for finishing third. But despite these problems, he lost just four minutes, compared to his main rival Yazeed Al-Rajhi. On the following day, in the final stage, he finished second, thus securing his third overall win in the Sealine Cross Country Rally. “What a great week for us,” beamed Al-Attiyah. “It was a gruelling race and really long – not like the one in 2014.” 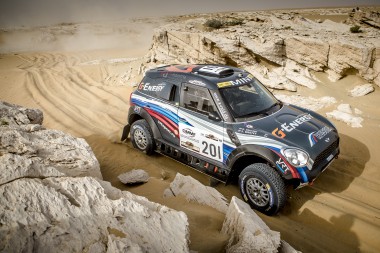 Vasilyev impressed with a very good and consistent performance. The current FIA Cross Country Rally World Cup leader made it to the top three in every special stage to finish runner-up, in the end, as a rival dropped back due to technical problems. “Yes, we are slightly surprised but the surprise was positive,” admitted Vasilyev. “The battle with Yazeed was great and in the end, we had a little luck. The rally was very tough but we are happy about the points and the championship lead.” Vasilyev now has got 123 points on his tally and defended his FIA Cross Country Rally World Cup lead.

Day three unfortunately made an early and sudden end to the appearances of Erik van Loon / Wouter Rosegaar (NDL) and Harry Hunt (GB) / Andreas Schulz (GER). Both lost it at the same place and rolled. Fortunately, all the four survived the incidents unharmed. “It goes without saying that I’m extremely disappointed,” said Hunt. “Particularly in consideration of the fact that we made it to the podium in Abu Dhabi. It was a massive impact but the MINI is a very safe vehicle and so we weren’t hurt. Now I’m looking forward to the next event.” On the following day, Spanish pairing Nani Roma / Alex Haro encountered a technical problem and couldn’t complete the special stage. Nonetheless they were back to contest the final stage and secure the fine fourth place, in the stage.

Sven Quandt, CEO X-raid GmbH
“Nasser delivered in sensational style and Vladimir also scored a lot of World Cup points, with his consistent style of driving. On the other hand, the accidents of Erik and Harry were a real pity. Even more so as they both were really fast. While Nani opted for a somewhat more conservative approach, with his new co-driver.” 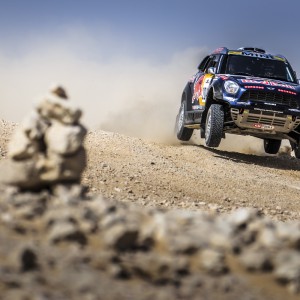 A dominant drive from start to finish has seen Nasser Al-Attiyah and Mathieu Baumel retain their crown at the Sealine Cross-Country...
Copyright 2011-2016 Rallyraid.net - RISE Network. All Right Reserved.
Back to top