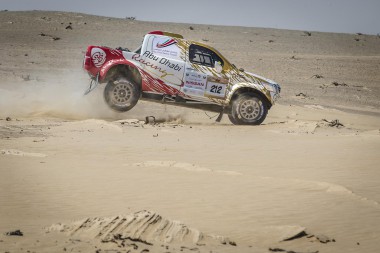 The Emirati lines-up alongside the Brazilian Reinaldo Varela and Poland’s Marek Dabrowski in a powerful line-up of Toyota Hiluxes run under the watchful eye of the Belgium-based car preparation company. Overdrive Racing will also run a fourth Toyota Hilux for the French driver Romain Vozniak and his French former enduro rider/co-driver Jean Brucy.

Vladimir Vasilyev, the defending FIA World Cup champion, was scheduled to defend a 21-point lead in the FIA World Cup standings, but has recently undergone a heart procedure and plans to return to competitive action in Hungary next month.

WRC star Al-Qassimi made his debut in the FIA World Cup for Cross-Country Rallies at his local Abu Dhabi Desert Challenge in April and set some impressive times, despite his obvious lack of experience in the specialised cross-country form of rallying.

The twisty nature of the rural tracks of Baja Spain should suit him down to the ground, however, and he and new French navigator Edouard Boulanger will be pushing for a potential podium finish when the three-day event draws to a close in Teruel on Sunday afternoon.

“I really enjoyed the Abu Dhabi Desert Challenge and working with the team at Overdrive,” said Al-Qassimi. “It was a new challenge for me and a new racing discipline.  This will also be something new for me. I was pleased with my performance in the dunes, now I need to carry that forward to the terrain that will face us in Spain. It will not be easy. The entry list is very strong, with some experienced names.”

Overdrive Racing Toyota Hiluxes finished second, third and fourth at the last round of the FIA World Cup in Italy.  The Brazilian duo of Varela and Gustavo Gugelmin were second and that has catapulted Varela into outright third place in the FIA World Cup standings. The Brazilian was fifth in Baja Spain in 2014 and has been a model of consistency this season.

“It is obviously disappointing for Vladimir to miss this event and we look forward to welcoming him back again soon,” said Overdrive team director Jean-Marc Fortin.

“This is always a difficult and demanding rally with the temperatures and the tyre wear and the fact that the new rules dictate that you only have 10 tyres per car. This makes the strategy interesting for the team managers.

“Maybe it helps us a little as well, because we have a little less engine torque than our rivals and, perhaps, a little less tyre wear. There is one very long stage of over 300km, so it will be important for us to make a good start to ensure we have a good road position and don’t suffer delays in the dust.”

The Kazazhstan duo of Kanat Shagirov and Alexandr Moroz will run another Toyota under the Mobilex Racing Team banner and the Russian duo of Artur Murashkin and Alexander Zheludov will use an Overdrive Toyota Hilux under a Protech Motorsport entry.

Baja Aragon Spain is based at the eastern Spanish town of Teruel and is likely to feature demanding high summer temperatures in the high thirties Centigrade and dusty conditions. The competitive action gets underway with a timed 7.8km super special stage from 18.59hrs on Friday evening (July 24).

The bulk of the competitive action takes place on Saturday (July 25) and features a 160km selective section between Calamocha and Calatayud from 08.24hrs and a second 300km timed test between Calatayud and Teruel, starting at 11.28hrs.

After an overnight halt in Teruel, the competitive action draws to a close on Sunday (July 26) with a 180km section between Calamocha and Teruel, starting at 10.29hrs. The ceremonial finish takes place in Teruel later in the afternoon. 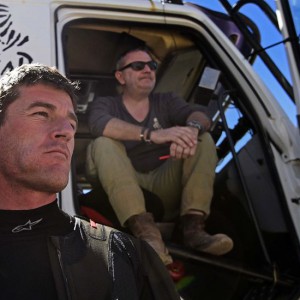 After 12 participations and 5 victories on the Dakar as a biker, Marc Coma has been called upon to assist Etienne Lavigne...
Copyright 2011-2016 Rallyraid.net - RISE Network. All Right Reserved.
Back to top