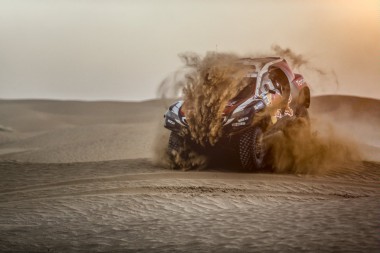 The PEUGEOT 2008 DKR is to make its first competitive appearance since January’s Dakar at the end of August. Two cars have been entered for the China Silk Road Rally (August 29-September 11) which traverses some of the country’s most epic roads.

It is a breath-taking journey that awaits Team Peugeot Total through what is today the brand’s biggest single market. Its participation in the event – initially called the China Grand Rally – is one of the key moments of the team’s busy preparations for the 2016 Dakar. Its cars will be in the hands of two all-French crews, namely Stéphane Peterhansel/Jean-Paul Cottret and Cyril Despres/David Castera who are looking forward to the challenges of the event’s historic and highly selective itinerary.

The in-house codename for the specification of the two PEUGEOT 2008 DKRs that will compete in China is ‘2008 DKR 2015+’. They feature a number of evolutions based on the lessons learned during last January’s Dakar which was Peugeot’s first involvement in the cross-country classic in 25 years. The most notable changes concern the suspension and engine, as well as the introduction of new Michelin tyres which combine superior performance with a lighter weight, with no detriment to their strength.

This specification is an interim version which provides a foretaste of the car that will tackle the 2016 Dakar. It includes a number of parts that were put through their paces during a series of tests in Morocco earlier in the year. However, Team Peugeot Total knows perfectly that there is no substitute for actually competing in anger and the entry of two cars for the China Silk Road Rally marks an important step in the PEUGEOT 2008 DKR’s development programme. Meanwhile, on the other side of the planet, Carlos Sainz will be busy working on the 2016-spec 2008 DKR! 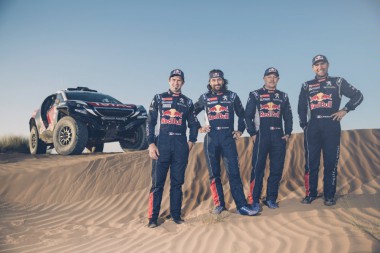 “The China Silk Road Rally will be a scaled-down dress rehearsal for the Dakar,” says the 11-time Dakar winner and China Silk Road Rally novice Stéphane Peterhansel. “It is a big opportunity for us because it will be the longest test we do and we will be able to replicate the sort of timetable and conditions we face in South America. Some roads are even quite similar.”

Cyril Despres, who gave a fresh turn to his career last year at the age of 40, believes the experience gained in China will help him to pursue his familiarisation with competition on four wheels after a glittering career – and five Dakar victories – on motorbikes. He also sees it as a chance to accustom himself to working with his new co-driver, David Castera, who also needs to acclimatise to a different role…

“I still have a great deal to learn about driving a car on the Dakar, and David has even more to learn,” observes Cyril Despres. “That said, I think it’s good to help each other as we learn together. We will need to grow together as a crew and I have every confidence in his abilities.”

That said, David Castera is no newcomer to the world of cross-country rallying since he has already contested the Dakar several times on two wheels himself, with a personal best of third place in 1998. “I never imagined I would end up as Cyril’s co-driver,” he says. “I thought he was joking when he suggested the idea. This is just a different way of being competitive, which is something I have always been. It’s a new challenge and I can’t wait…”

The China Silk Road Rally starts in Xi’an, around 1,000 kilometres southwest of Beijing. It is a former capital of China (when it was known as Chang’an) and is famous as the place where 6,000 full-scale terracotta warrior statues are buried. The route, which was put together by former Dakar victor and organiser Hubert Auriol, will take crews to the Great Wall of China, via vast arid deserts and towering sand dunes. It will also follow Marco Polo’s footsteps through more mountainous territory and even dense forests. The total distance of 6,500km is spread over 13 days and will visit five different provinces: Shaanxi, Ningxia, Inner Mongolia, Gansu and Xinjiang.

For Team Peugeot Total and Red Bull, the event will be a key test, as Peugeot Sport director Bruno Famin explains: “The primary purpose of going to China is to continue the car’s development and try some new parts in a competitive context. At the same time, China is an extremely important market for the brand, so we won’t turn down the opportunity to shine in this magnificent setting should it arise…” 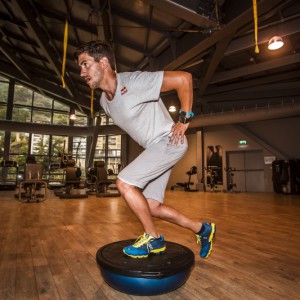 Two and a half months after the accident in the penultimate stage of the Argentine Desafío Ruta 40 which forced Joan Barreda...
Copyright 2011-2016 Rallyraid.net - RISE Network. All Right Reserved.
Back to top