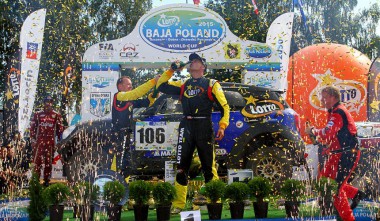 For the second time in a row and fifth in his career Krzysztof Hołowczyc (MINI 4All Racing) won LOTTO Baja Poland, eight round of this year’s FIA World Cup for Cross Country Rallies. LOTTO Rally Team driver took the rally lead during the first running of nearly 150-kilometer long stage held at the military training ground in Drawsko Pomorskie. Overall, Hołowczyc together with his co- driver Łukasz Kurzeja, has won two out of five stages of the rally. Second place went to Nasser Al-Attiyah (also in a MINI), who extended his lead in the FIA World Cup. The podium was completed by a Dutch-Belgian pairing of Bernhard Ten Brinke and Tom Colsoul (Toyota Hilux Overdrive). After the rally come to an end Hołowczyc announced his retirement from cross-country rallying after a decade-long career highlighted by a Dakar podium finish earlier this year.

Final act of the rally, second running of the stage “Dobra” located by the rally park in Szczecin, was interrupted by a downpour. However the weather didn’t have any impact on the front-runners. Hołowczyc, chasing his fifth victory in the rally, drove preservative being 20 second slower compared to his own time from the first running of the stage. The Pole, despite being 23 second slower than the Qatari at the final stage of the rally, won comfortably with over 7-minute advantage. Third driver of the rally Bernhard Ten Brinke won the first running of “Dobra” test. Making his comeback after a back injury Martin Kaczmarski, ended-up just outside the podium. Former motorcycle rider Marek Dąbrowski (Toyota Hilux Overdrive) finished fifth, ahead of another two-wheel specialist Jakub Przygoński (MINI All4 Racing) who was making his off-road car debut. Further places went to Adam Małysz (MINI All4 Racing), Miroslav Zapletal (H3 Evo) and Paweł Molgo (Toyota Hilux Overdrive).

In the T2 category Jarosław Kazberuk and Robin Szustkowski (Ford Raptor), representing LOTTO School of Champions, had an impressive run, taking the lead after the first running of the stage “Poligon Drawsko”. On Sunday the duo, due to a technical failure, lost their T2-category lead, however they were fastest on the final test. Eventually the victory in T2 went to Denis Berezovskiy / Ignat Falkov (Nissan Patrol Y62) of Kazakhstan. Klaudia Podkalicka (Mitsubishi Pajero) did a good job and finally ended up second in the T2 category. T3 was won by, known from traditional rallying, Aron Domżała and Szymon Gospodarczyk.

LOTTO Baja Poland was also a round of Polish Championship for Cross Country Rallies, where the victory went to Hołowczyc, ahead of Ten Brinken and Kaczmarski.

In the FIA CEZ in T1 group Krzyszof Hołowczyc took the victory, in T2 Klaudia Podkalicka, in T3 Aron Domżała and in TH Piotr Gadomski. 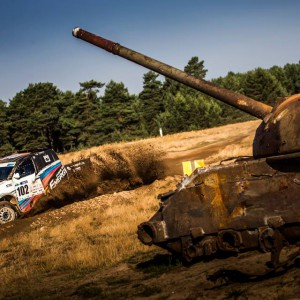 Overdrive Racing’s Toyota Hiluxes dominated the upper reaches of the top 10 at the end of Lotto Baja Poland, round eight...
Copyright 2011-2016 Rallyraid.net - RISE Network. All Right Reserved.
Back to top