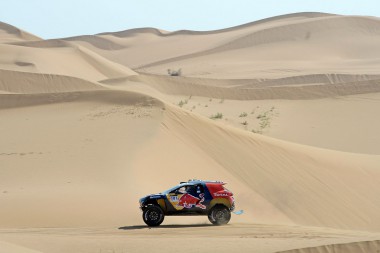 Record-breaking 11-time Dakar champion Stéphane Peterhansel called upon all his experience to win the tricky short second stage of the China Silk Road Rally between Zhongwei and Alxa Zuoqi and take the overall lead in his factory Peugeot 2008 DKR.

Peterhansel and navigator Jean-Paul Cottret clocked a time of 1hr 19min 09sec on a special that included a series of tricky dunes and sandy terrain and they arrived at the bivouac at Swan Lake in Alxa Zuoqi Left Banner, Inner Mongolia, with an unofficial outright lead of 1min 35sec.

“We started with too low pressures in the tyres and had a tyre come off the rim,” admitted Peterhansel. “We got some help from Cyril (Despres). The stage was very technical and really hard. You can see that from the time of 79 minutes for 63km. We didn’t attack too much, but I am very happy for this first stage victory for the Peugeot 2008 DKR with the changes we have made since the last Dakar.” 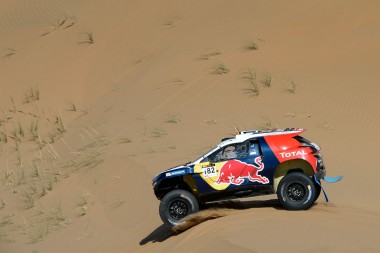 of the Peugeots. Despres was 52 seconds slower than Peterhansel and holds third overall.

“We stopped to help Peter so he lost as little time as possible,” admitted Despres. “I was very surprised by the stage. It was very technical and there were all kinds of dunes – short, high, sharp and non-stop. I was behind (Christian) Lavieille for a time and we tried to pass him like on a bike out of the tracks. It was a bad idea. We couldn’t make it! We stayed behind and waited for a good moment.”

Overnight leader Han Wei finished the special in third position and slips to second place in the overall standings with his Haval.

After delays on the opening stage, Chinese driver Lui Kun clocked the fourth quickest time of the day with his Mitsubishi Pajero MPR11 and a close contest persists between the L200 of Lui Yan Gui and the Haval of Christian Lavieille for fourth overall. The Chinese holds a slender advantage over the Frenchman after day two, despite getting stuck in the sand on two occasions.

Armand Monleón Hernandez was the class of the motorcycle field for a second day on his KTM 450 Rally. The Spaniard finished the short stage around 11 minutes quicker than Su Wen Min to extend his overall advantage into Inner Mongolia.

The Australian Isuzu MU-X crew of Adrian Di Lallo and Harry Suzuki found the short stage extremely challenging and lost over three hours. “Those dunes were really gnarly and difficult to read,” said Di Lallo. “We lost some time as a result of the GPS and our tyres today – a couple of times the tyre rolled off the rim due to the low pressures we had to run on the sand.”

Chinese driver Zhang Guo Yu and his French navigator Sébastien Delaunay enjoyed the challenge in their Polaris. “It was a good stage and very funny with the ATV Polaris,” admitted the co-driver.

The Dutch crew of Jan and Mark Mooij were forced to change a tyre and lost the wheel they had changed on the McRae Prototype in the stage, but they reached the finish without serious issues.

Tomorrow (Tuesday), competitors tackle a loop stage through Inner Mongolia. The selective section begins just over a kilometre from the bivouac and runs for 152.62km, before a short liaison section of 4.31km brings teams back to Alxa Zuoqi.

All’s well – apart from the end 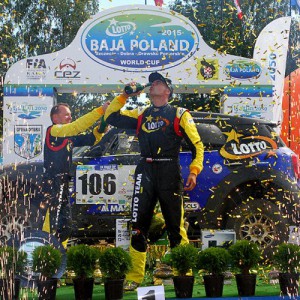 For the second time in a row and fifth in his career Krzysztof Hołowczyc (MINI 4All Racing) won LOTTO Baja Poland, eight...
Copyright 2011-2016 Rallyraid.net - RISE Network. All Right Reserved.
Back to top