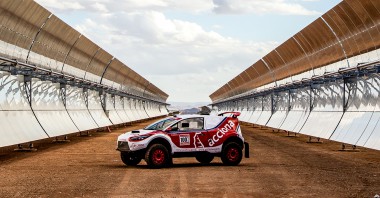 ACCIONA will be presenting in Morocco a developed version of the ACCIONA 100% EcoPowered, the first electric car powered only by clean energies to compete last January in the Dakar Rally.

This time it will participate in the Morocco Rally, a competition taking place in the Drâa Valley, with a route over 2,200 kilometres long divided into five stages and which will confront over 300 competitors in the world of motor from all five continents.

With this zero-emissions vehicle, ACCIONA continues proving the feasibility of renewable energies under the most extreme conditions. This commitment started in 2011 with the kite-powered sledge that reached the South Pole, which was preceded by its participation in the Vendeé Globe, aboard a sailing boat that sailed around the world on its own, without stopping or using fossil fuels. This new challenge reaffirms the company’s commitment on developing renewable energies as a reliable and competitive solution.

It will be the first time an electric vehicle leaves the start line in a championship race within the world rally calendar.

The race will take place from 5th to 9th October in Morocco. 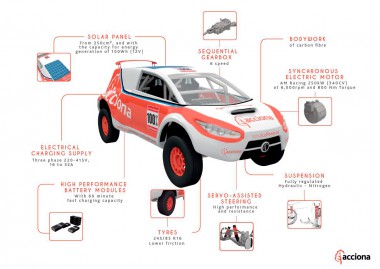 ACCIONA, the Spanish infrastructure, water, services and renewable energy multinational, is once again present in an extreme international rally with the ACCIONA 100% EcoPowered.
The construction of the vehicle meant a continued research and development work since it was conceived in 2012 by the R&D&I department of ACCIONA. After performing the different tests, improvements have been included this year allowing for it to resist the conditions in the Drâa Valley, very similar to those of the Dakar regarding climatology and relief.
The Morocco Rally is the last rally of the year in the FIA World Cup, with over 300 participants from 27 countries meeting for their last adventure in the Great Desert of Morocco.

Ariel Jatón will be in this race driving the ACCIONA 100% EcoPowered, an Argentinean rally driver with an extensive career in the world of off-road competitions and who has collaborated in the development of the car. Gastón Scasuzzo will be at his side providing his experience as electronics engineer on top of his knowledge regarding navigation.

With ACCIONA being present in Africa since 1940, Morocco is a key country for the company where it has carried out two important sustainable projects. It built the first thermosolar energy plant of the country with a power of 160MW, together with the drinking water treatment plant of Oum Azza, covering the needs of 2 million inhabitants and allowing for drinking water supply to be reinforced in one of the areas with the highest population growth.
Furthermore, this year ACCIONA will once more be the proud sponsor of the Morocco Solar Festival taking place at Ouarzarzate, opening out to the desert, from 6th to 18th October. This festival is in honour of the Sun, an inexhaustible, efficient and non-polluting energy source.

One of the main challenges of this project has been to keep the right calculations and to develop the design of the battery and electric power system in order to guarantee high autonomy in all kinds of terrain, without becoming a handicap regarding the dynamic behaviour of the vehicle.

ACCIONA is one of the main Spanish corporations, operating in infrastructures, energy, water and services in over 30 countries. Its “Pioneers in development and sustainability” motto reflects the commitment to contribute towards economic growth, social progress and care for the environment in all its activities, a commitment acknowledged by its inclusion in the Dow Jones (DJSI) and FTSE4Good sustainability indices. ACCIONA is quoted in the Ibex-35 index, having a workforce of over 34,000 professionals and sales reaching 6,607 million euros in 2013. 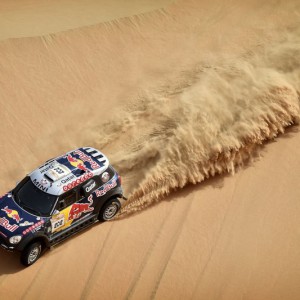 It’s true, the 2016 Dakar Rally is taking centre stage more and more but at the same time, the battle for the FIA Cross...
Copyright 2011-2016 Rallyraid.net - RISE Network. All Right Reserved.
Back to top