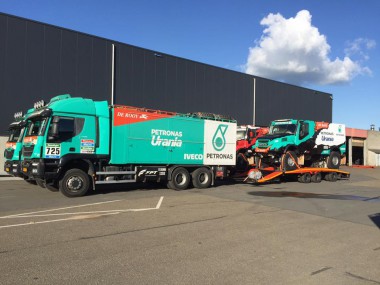 Team Petronas Iveco De Rooy takes part in the OiLibya Rally du Maroc with four trucks. For Ales Loprais, Federico Villagra and Ton van Genugten the OiLibya will be their first race driving a De Rooy truck and thus it is an important test heading to the Dakar. Gerard de Rooy didn’t plan to take part in Morocco but as he has a new navigator (Moi Torrallardona) after the passing of Jurgen Damen, he found it wise to take part as well to improve the communication and get used to one another.

All four trucks are ready to battle for the podium, De Rooy stated at the scrutineering for the OiLibya, that starts on Monday. “Ales, Federico and Ton are driving the newly rebuild Dakar-ready trucks. Mine is still the one from last year and has to be rebuild after this rally. But it is good as an extra test anyway.”

De Rooy teaming up with one of his biggest rivals Ales Loprais raised some eye brows but the winner of the Dakar 2012 has a lot of faith in the combination, that is meant to battle together instead of wasting energy fighting each other. “Dakar is a team sport. Only with combined strength of drivers that are capable of winning it is possible to beat Kamaz. Ales had the same problem I had: no team mate strong enough to fight for victory. For sure Ales is a rival. We both want to win the Dakar. But we only can if we can support each other. Naturally I prefer to be the one on the highest step of the podium, but when it is Ales, it will still be a Team De Rooy Iveco that is winning.”

With the back-up of his compatriot Ton van Genugten De Rooy is even more confident. “Ton has shown what he is worth by finishing in eleventh in the last Dakar. He has gained a lot of experience since by testing in Morocco twice and now competing in this rally as well with the new truck.”

To Van Genugten the OiLibya will be a new experience. “We’ve had a shakedown with the truck to test on fast tracks as well as in the dunes and it feels really good. This Iveco is quite different from the truck I rode last year and I had to get used to the stronger engine. I had to change by riding style a little but now the Euro 6 engine has more torque and is even easier to drive. I was able to join Ales and Gerard quite easily.”
Although the truck of Van Genugten has a different look the basis is the same as the Torpedo’s De Rooy, Loprais and Villagra have. “Basically the only difference is their nose. Driving the same truck as they have, gives a lot of confidence. I haven’t tried their truck yet to feel the difference though. They don’t let me! It’s probably better not to and first bring this truck to the finish in the best possible position.”

The first stage of the OiLibya Rally will be a loop near Zagora of 330 kms special stage and 133 kms liaison. 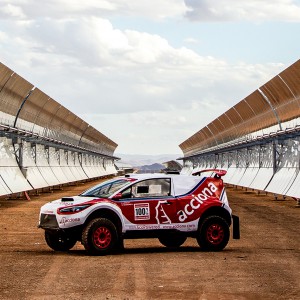 ACCIONA’s electric vehicle will compete in the Morocco International Rally from 5th to 9th October ACCIONA will be presenting...
Copyright 2011-2016 Rallyraid.net - RISE Network. All Right Reserved.
Back to top