Today, the MINI ALL4 racing Crews had to race on a loop around the city of Jujuy. And while the competitors were on the liaison section to the start, Team X-raid hit the road to Bolivia. The drivers have to spend the night without their service crews and their cars – standing in the Parc Fermé – mustn’t be touched. 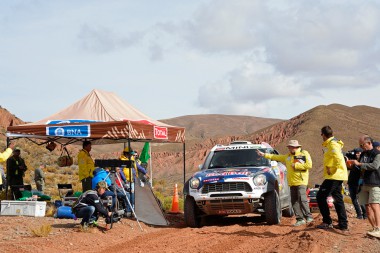 Nasser Al-Attiyah (QAT) and Mathieu (FRA) finished fourth. “I pushed right from the start and we were truly fast at check point one,” said Al-Attiyah, but afterwards the track featured numerous undulated straights and we lost a lot of time as the buggy is extremely fast, in this terrain. But there still are another nine days to go.”

The MINI ALL4 Racing pairings Nani Roma / Alex Haro (both ESP) and Orlando Terranova / Ronnie Graue (both ARG) temporarily again raced in tandem, today, to finished eight and ninth. “At first I was able to close in on Orly and then we jointly closed the gap to Vasilyev,” revealed Roma. “Orly succeeded in passing him but I got caught in his dust, thus unfortunately losing a lot of time.” This also was confirmed by the Argentinean. “At first we lost a minute due to having made a mistake and later, we lost even more time behind Vasilyev.“

Finland’s Mikko Hirvonen failed to make it to the top 10 – for the first time in this year’s edition of the legendary event. He completed the stage without encountering any problems but his lack of experience cost him dearly. “Actually a boring special stage – 400 kilometres and 200 kilometres of the distance just straight ahead and flat out. But there were two many compressions and in these situations I lose time due to my lack of experience as I’m just too careful,” admitted Hirvonen who now holds seventh position in the overall standings. “The high altitude tomorrow won’t be a problem for me and I feel good. I just hope that the special stage will be more technical and more of a challenge – as it was the case yesterday.”

The Dutch pairing Erik van Loon / Wouter Rosegaar now holds third position in the overall standings and are the third-best squad of the MINI ALL4 Racing line-up. We had to eat the dust of many motorbikes and quads,” said Van Loon. “I slowed down to not put anybody at risk but of course, doing so cost us time. In addition, we took the wrong way, in the early stages. Otherwise, we certainly would have finished 10th or 11th.”

Tomorrow the field will contest the second half of the marathon stage. Following a night without service, the drivers have to safely take their MINI ALL4 Racing racers to Uyuni, Bolivia. Right after having crossed the border, the competitors will start into a 327-kilometre special stage. But the drivers will have to not only go easy on their cars but also have to watch out for themselves and their co-drivers. The route takes the field to an altitude of 4,600 metres about sea level (the highest special-stage spot in the history of the Dakar) what can result in mountain-sickness symptoms such as headache.

Back-ground info: Border crossing
The Dakar is an enormous logistic challenge – with the border crossing from Argentina to Bolivia being particularly demanding. To make sure that the competitors haven’t to be controlled at the border – what arguably would result in long queues and chaos – the competitors will be offered the opportunity to already produce their passports and have them sealed for the respective border crossings here in Jujuy and later in Uyuni. So, only an ASO paper has to be submitted at the border. 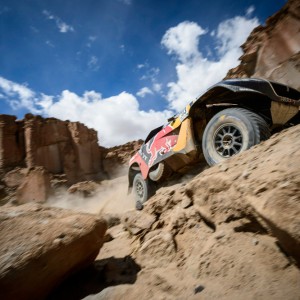 The PEUGEOT 2008 DKR confirm their potential by signing a one-two-three in the first part of the Marathon stage, the Jujuy-Jujuy...
Copyright 2011-2016 Rallyraid.net - RISE Network. All Right Reserved.
Back to top