The PEUGEOT 2008 DKR confirm their potential by signing a one-two-three in the first part of the Marathon stage, the Jujuy-Jujuy loop. 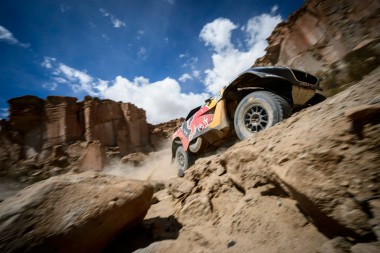 The Peugeot 2008 DKRs were classified first, second and third on a Dakar stage for the first time, on today’s loop that went around Jujuy. All four cars have also finished leg four in the top five overall. They returned straight to parc ferme under the marathon stage regulations, where no service from the mechanics or the crew is allowed. Tomorrow, they head towards Bolivia for leg 5 of the rally.

Stéphane Peterhansel and Jean-Paul Cottret took their first Dakar stage win with Peugeot. They fought closely with Carlos Sainz-Lucas Cruz and Sébastien Loeb-Daniel Elena throughout the stage for the honours. By the end of it, the three Peugeot crews were covered by just 30 seconds.

Carlos Sainz and Lucas Cruz were in the stage lead by the first waypoint but lost 3min02sec just before the 53-kilometre mark with a left-rear puncture. The number 303 crew then picked up their pace to make the time back, and demonstrate stage-winning pace by waypoint nine (out of 10).

Cyril Despres and David Castera complete Peugeot’s excellent performance today by getting into the top five: one of the best surprises from the early stages of this rally.

In the overall classification, Sébastien Loeb continues to lead from Stéphane Peterhansel.

Stéphane Peterhansel:  “The stage was quite quick with lots of straights that were flat out, and some fun technical sections as well. It was also a stage at high altitude, where we weren’t particularly competitive last year. On the whole we kept everything clean with no navigational mistakes, and with a mind towards tomorrow’s stage as welll when it came to looking after the car and the tyres. We’re ready now for the second part of the marathon stage but the gaps are small. Today resulted in a stage win for us, but this also means that we open the road tomorrow. Sebastien is in a good place. He will start from third on the road and he’ll have our tracks to follow. But you never know how things will go during the actual race. We’re going to be driving without any information about the splits. In any case, it’s certainly going to be interesting.”

Carlos Sainz: “I had a left-rear puncture at the start of the stage between WP1 and WP2. We lost three minutes, which we regained again by the end of the stage, without even pushing to the maximum. I’ve got just one spare wheel in the car now for tomorrow, so we need to be careful.”

Sébastien Loeb: “Today’s stage wasn’t as nice as yesterday’s. We had a problem with the sentinel, which went off a few times but with nobody behind us! We even stopped once to let the non-existent traffic come past… “

Cyril Despres: “I saw Carlos’s car at the start of the stage, which had stopped there with a puncture. So I realised that it was important to be careful, especially as we had a lot of dust when we came up behind some other competitors. We caught up Bernard Ten Brinke, who had started six minutes ahead of us. That’s a good sign of the pace we have.” 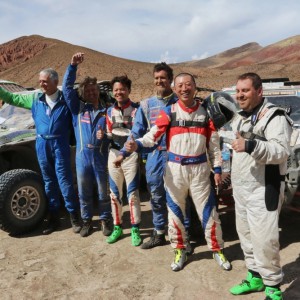 The deluge is now behind and all four crews of the Polaris Xtremeplus team took the start of the marathon stage this morning...
Copyright 2011-2016 Rallyraid.net - RISE Network. All Right Reserved.
Back to top