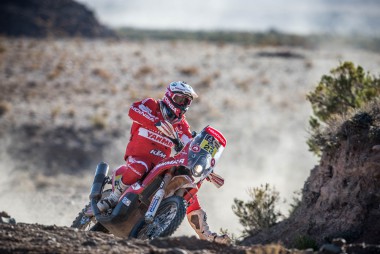 The spirit of Dakar, for anyone who has followed the rally for the last decades, is this: huge sand dunes, sweltering heat and few references by to orientate in navigation. That is what the participants of the 2016 Dakar faced in their arrival to the dreaded Fiambala dunes. All this and more, because the race had to be neutralized when the organization judged that the situation was becoming critical to the safety of the riders who piled up between the dunes, battling temperatures of over 48 degrees. The chaos was at times worrying and several pilots had to be rescued by helicopter.

It is also true that these occasions are the ones that draw the line between experts in Dakar and those who only aspire to rack up kilometers. Proof of this are the new discards, with the breakdown of Goncalves, and the loss of minutes of Pedrero, Duclos, Viladoms and Cervantes himself. But these difficulties also make the cream rise to the top, and the more experienced riders profit from the turbulences of this kind of stage. The first of them was Australian Price, who has consolidated himself as race leader, and among them, the great Gerard Farres with another great performance, finishing eighth and gaining a new position in the overall standings (now seventh).

Gerard was exhausted, but happy: “This was the most difficult stage of the Dakar and one of the toughest I’ve ever experienced. The sand was very soft and very hot, but I was able to complete the whole stage with a good pace, although the final kilometers were torture. We will see what happens with the rankings because riders and bikes have suffered a lot to get here and we are in a marathon stage.”

Another Spaniard capable of making his strength count was Antonio Gimeno, the solid rider of the HIMOINSA Racing Team, who made a surge in the stage and got his best finish, ending up in 25th place. Gimeno found his place in the race and has not faltered a single day, but today he had a hard time: “It went very well at first, but I made a navigation mistake and lost four minutes. From then on I pushed too hard and I wore out quickly; I was completely melted down when I arrived at CP2, so I am happy with the cancellation and my result. ”

Ivan Cervantes again suffered from his biggest fear, navigation, but he played his cards very well, “I took a good start of the stage and by mid-stage was already in 14th place, but twenty kilometers from the end I ran out of gasoline and thanks to Viladoms stopping and giving me some of his, I could carry on. We lost many minutes in doing this, also because Jordi’s bike did not start well and it took a while for both of us to set off, but when we arrived at CP 2 the stage had already been cut.”

The tandem composed of Rosa Romero and Dani Oliveras also suffered the inclemency of terrain and heat and even had a good start to the stage, afterwards, they were trapped in the sea of ​​dunes with another fifty riders, but finally after a lot of suffering and delay, they arrived at checkpoint 2 in their usual positions. They are especially tired because of their late arrival in the previous stage which only allowed them to sleep for a few hours.

Although the first riders have managed to reach the finish line, the unofficial classification at this time is the one at checkpoint No. 2, where the race was neutralized. 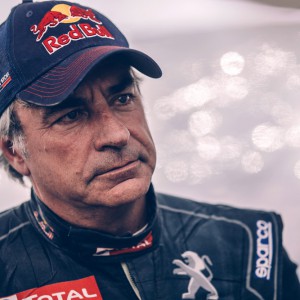 Carlos Sainz is not the type of man to miss an opportunity a second time. Deprived of victory yesterday by 12 seconds, today...
Copyright 2011-2016 Rallyraid.net - RISE Network. All Right Reserved.
Back to top