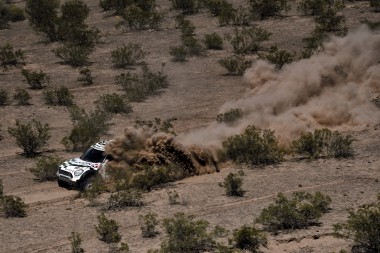 Actually, today’s stage should have featured the first true dunes but once again, the weather changed the Dakar schedule. This time, however, extremely high temperatures were the problem. Temperatures so high that the organisers felt impelled to stop the special stage at CP2 ( at kilometre179). By finishing third, Mikko Hirvonen (FIN) and Michel Périn (FRA) were the fastest AXION X-raid Team pairing, today, with Nasser Al-Attiyah (QAT) and Mathieu Baumel (FRA) taking their MINI ALL4 Racing to fifth. Both pairings defended their third and fourth positions in the overall standings. Orlando Terranova and Ronnie Graue (both ARG) also made it to the top 10 by securing ninth position! Nani Roma and Alex Haro (both ESP) finished 12th.

Tomorrow, in stage 10, the competitors will have to race from Belén to La Rioja. And again, the main challenge of the stage will be dunes – the Dakar’s special highlight. But tomorrow’s stage will feature an innovation: The start. The first 10 bikes, 10 cars and 5 trucks will start in the order of the times they set today. So, the categories possibly will be mixed, tomorrow. The total distance covered tomorrow will add up to 763 kilometres, 278 of them in the special stage!

Spaniard Xavier Pons put his Ford Ranger to work in a treacherous off-road environment and much higher temperatures for the first...
Copyright 2011-2016 Rallyraid.net - RISE Network. All Right Reserved.
Back to top