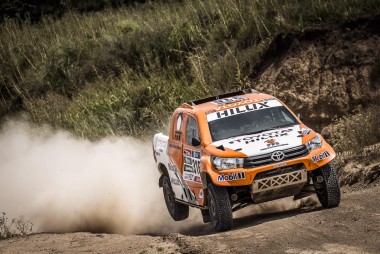 Overdrive Racing and Toyota Gazoo Racing South Africa have seen all eight of their new Toyota Hiluxes safely pass through the technical and administration checks for the 2016 Dakar Rally at the Technopolis in Buenos Aires. The team is making its final preparations for the ceremonial start and the 11km Prologue stage in the Argentinean capital, tomorrow (January 2nd).

Months of meticulous planning and intricate preparations will be put to the test when the eight cars begin the punishing 12-stage rally that crosses some of the remotest terrain in Argentina and Bolivia and offers 4,803km of competition in a route of 9,583km before the finish in Rosario on January 16th.

Former Dakar winner Giniel de Villiers and Saudi Arabian driver Yazeed Al-Rajhi head the Toyota Hilux octet in their Toyota Gazoo Racing South Africa cars. De Villiers has finished second and third overall with the Japanese marque in the past and has a superb chance to reach the top step of the podium on this occasion with the eight Toyotas now all equipped with the latest fully independent suspension.

Al-Rajhi held a podium position until the 11th stage in 2015 and is also confident that he can reach the top three in Rosario with German navigator Timo Gottschalk. “I am really happy to be a part of the official Toyota team,” said the Saudi. “This will help me reach the highest level. We have worked on the development of the Toyota to improve still further and the Rally of Morocco was a great chance to get used to the car.” 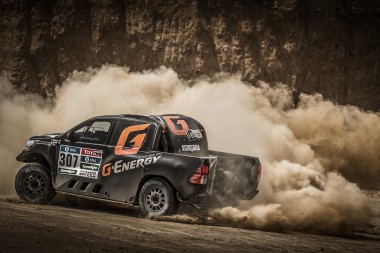 The former FIA World Cup champion, Vladimir Vasilyev, and navigator Konstantin Zhiltsov crew the third Hilux, run by Overdrive Racing under the G-Energy Team banner. Vasilyev finished fifth in 2015 and followed that performance with victory in the Abu Dhabi Desert Challenge and second place in Qatar’s Sealine Rally and the Pharoahs Rally in Egypt on his way to second place in the FIA World Cup.

Talented Dutchman Bernhard Ten Brinke and his Belgian navigator Tom Colsoul crew the fourth of the Toyotas. The pair achieved some useful performances in the FIA World Cup and Ten Brinke is confident that he can improve on the seventh overall he earned at the Dakar with Overdrive Racing in 2015.

The French duo of Ronan Chabot and Gilles Pillot crew Toyota number five on the capacity entry list. Chabot first took part in the Dakar in 2003 and has finished his last five rallies in South America in 13th, 12th, seventh, 18th and 10th overall.

South Africans, Leeroy Poulter and Robert Howie, drive the third of the Toyota Gazoo Racing South Africa Toyotas and the sixth of the Hiluxes at the top of the starting list. Poulter finished 16th last time out and set some impressive stage times, including the second fastest time on the final stage. He is relishing the event in the new Toyota where he thinks the omission of stages in Peru gives the petrol-engined Hilux a slight advantage.

The seventh of the Toyota Hiluxes is crewed by the Polish former enduro-riding duo of Marek Dabrowski and Jacek Czachor with backing from Orlen. Since switching from a career on two-wheels, Dabrowski finished seventh and 23rd at the Dakar in a Toyota and is confident that he can reach the top five on this occasion.

Dabrowski said: “In 2015, we competed in nine rounds of the FIA World Cup in the new version of the Toyota and we did as many kilometres as possible. We’ll need to find a good tempo and avoid mistakes. So much can happen in the car race. Our lives changed when we started our first Dakar. It’s now going to be my 16th and I want to do well.”

Czech WRC star Martin Prokop makes his Dakar debut with Overdrive Racing and co-driver Jan Tomanek in the eighth Toyota Hilux. A regular on rounds of the FIA World Rally Championship, Prokop will feel quite at home on the WRC-type stages around Vila Carlos Paz, but will find the tricky dunes around Fiambálá an altogether different proposition.

“To start the Dakar has always been my dream,” said Prokop. “Jean-Marc Fortin, the team director of Overdrive Racing, asked me if I wanted to test the new Toyota Hilux and it went well and I was then invited to do the Dakar. It’s a new challenge. After the Catalunya WRC Rally, I began to prepare with a lot of driving in the dunes in Dubai. I know I don’t have too much experience and I need to learn how the car behaves and how I will adapt to long stages in extreme conditions.”
The route

The threat of El Nino and forecast storms in Peru forced the Peruvian government into a decision to stop the Dakar Rally from starting in Lima and crossing through southern Peru. That shock decision left the Amaury Sports Organisation (ASO) without a host starting venue and the first half of the event in the middle of the summer of 2015.

The ASO worked around the clock for three and a half months to ensure that the race survived and a revised route was announced in September. A long opening stage on January 3rd takes crews across the centre of Argentina and through a WRC-style stage en route to Vila Carlos Paz, the traditional home of the Rally of Argentina.

The route then heads towards Termas de Rio Hondo for the second year running and then on to San Salvador de Jujuy in the Andes foothills on January 5th. There will be a loop stage around Jujuy on January 6th and then the Dakar caravan turns north towards the high altitude of Uyuni in Bolivia on January 7th.

The next stage loops around the Bolivian salt flats and the high plateau and then re-crosses the border into Argentina and on to Salta on January 9th.

The city hosts the traditional rest day on January 10th and the route then heads to La Rioja via two nights in Belén and the infamous white dunes of Fiambálá, a graveyard for many Dakar dreams over the past few years. Crews arrive in La Rioja on January 13th and head on to the punishing heat of San Juan on January 14th and back to Vila Carlos Paz via the penultimate stage on January 15th.

The final section takes crews from Vila Carlos Paz to a ceremonial finish in the city of Rosario on January 16th. 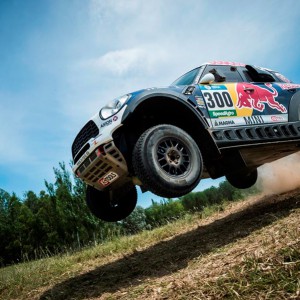 Nasser Al-Attiyah and co-driver Mathieu Baumel welcomed in the new year from their Argentinian base camp as they prepare...
Copyright 2011-2016 Rallyraid.net - RISE Network. All Right Reserved.
Back to top