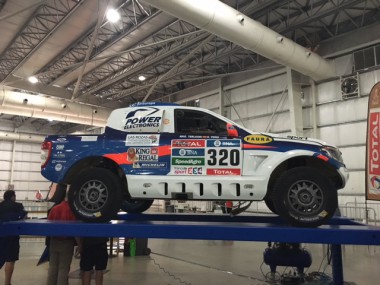 Spanish driver Xavier ‘Xevi’ Pons has safely passed technical and administration checks at the Tecnopolis exhibition centre in Buenos Aires and is making his final preparations for the start of his first Dakar Rally, tomorrow (Saturday).

The 35-year-old former WRC star is driving a Ford Ranger run through a joint project between DMAS South Racing and Esponsorama. A second Ford will also be run by DMAS South Racing for the Chilean driver Daniel Mas Valdes and his navigator Juan Pablo Latrach.

“I cannot wait for the start tomorrow of not only the race but a new chapter in my racing career,” enthused Pons. “The Dakar has been a dream of mine. The Ford Ranger is ready to go and the team has worked tirelessly in the months leading up to the event.”

Pons will benefit from test and development work that has been carried out by South Racing and its Chilean partner DMAS Competicion this season. His Argentinean navigator Ricardo Torlaschi is also looking forward to the challenge of bringing the Ford to the finish of the punishing 12-stage rally in the city of Rosario on January 16th.

“It is great, once again, to be racing the Dakar and to be sitting next to Xevi, who has so much international experience. It is a great opportunity and I am looking forward to the challenges ahead.”

Mas Valdes, who finished fifth overall at this year’s Desafio Ruta 40 in Argentina and eighth in Portugal’s Baja Portalegre 500, took part in the 2013 Dakar as a navigator for Macarena Pizzaro and finished 55th. He is relishing his opportunity to challenge for honours with South Racing as a driver.

Co-driver Latrach, on the other hand, has taken part in the Dakar on three previous occasions. The Chilean said: “We have enjoyed a great year and to be at the Dakar is the culmination of all the hard work that DMAS South Racing has put in this season. The Dakar is a long race and anything can happen.”

South Racing was founded in 2013 and has gained considerable experience of cross-country rallies across the globe in that time. “Our team is ready and we have a great line-up,” said South Racing’s director Scott Abraham.

“I think Xevi will surprise some people, but we are realistic and the team’s goal is to have a solid result and to bring the Ford and our other cars to the finish in Rosario in the best possible positions. Out team have worked hard for the entire season developing and racing the NWM-constructed Ford Ranger with great results. We hope to carry that momentum into the Dakar over the next two weeks.”

The Dakar Rally starts in Buenos Aires tomorrow (Saturday) with the ceremonial send-off in front of millions of fans and a global television audience. Then a capacity entry of cars, bikes and quads tackles an 11km Prologue stage that will determine the starting order for the first 258km stage between Rosario and the town of Vila Carlos Paz on Sunday. 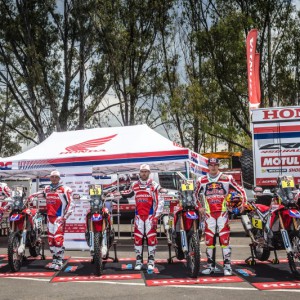 With the technical and administrative tests completed the team can now look forward to a New Year’s Day morning of final...
Copyright 2011-2016 Rallyraid.net - RISE Network. All Right Reserved.
Back to top