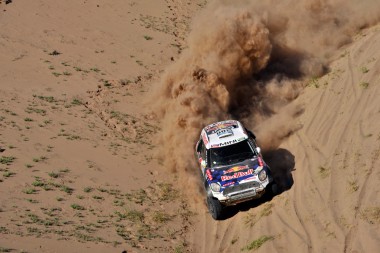 Qatari driver Nasser Al-Attiyah predicted that the desert stages in the Fiambala region would prove decisive in the outcome of the rally, and with big drama from the two desert stages held so far, he has proved his point.

Today’s action took the competitors in a loop around Belén, with natural obstacles including sand dunes and camel grass to negotiate. This is classic Dakar Rally territory, unlike many of the more clearly delineated tracks seen in the first week. The open spaces also allow co-drivers to demonstrate their skills in plotting the most effective route, with Nasser benefitting from the expertise of Frenchman Mathieu Baumel alongside him.

However, in view of the extreme heat that had already caused difficulty for a number of bike riders, the organisers took the decision to stop today’s stage after CP2, which meant that most drivers only completed two-thirds of the planned action, with temperatures pushing 50 degrees centigrade.

Nasser didn’t suffer with the heat, but he did suffer from two punctures at kilometre 120 – or rather, deflations, as the Qatari explained: “We were just driving along on sand and the air came out of the two tyres on the right of the car. It wasn’t a puncture, as we didn’t hit anything. At least it happened at the same moment, so we could stop just once to put the air back in both tyres. 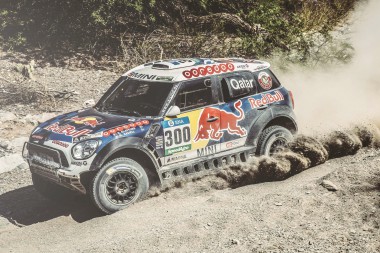 Nasser also hit his hand on the seat after fixing the tyres, developing a spectacular bruise on his right wrist. Nonetheless, he was disappointed by the decision to stop today’s stage – having experienced conditions that are even hotter than these ones in the past.

“I didn’t feel too bad: it was hot but I have experienced more heat on some motorsport events in the past,” he said. “It was a pity for me the stage didn’t carry on; I needed all the kilometres I can get. The performance of the car was very good; I have an excellent feeling now. So for me the choice to stop was a bit strange.”

In fact, prior to his tyre issues, Nasser was leading the stage from Carlos Sainz, reminiscent of their epic battle of 2010. In that year, Sainz and Nasser traded seconds as Volkswagen team mates, before the Spaniard got the better of the Qatari by 2m12s in one of the closest finishes in Dakar history. However, the following year it was Nasser who was celebrating the overall win with Sainz placed third.

Adding to the difficulty of today was the fact that Nasser and Mathieu were running first on the road, having won yesterday’s stage. “Nasser kept on asking me ‘are you sure this is the right way?’ on the stage,” reported Mathieu. “But I was confident that we had got it right. It wasn’t easy stage for us, but it’s worked out OK in the end as we don’t want to be first on the road tomorrow, so we’re reasonably happy.”

In the end, because of the punctures and stage cancellation, Nasser took just five seconds out of the two Peugeot drivers in front of him, maintaining third overall. Tomorrow some bigger sand dunes and even more complex navigation wait, with extreme heat once again.

All the elements are in place for Nasser to continue his charge up the field as he bids for a third Dakar title, with the rally finishing on Saturday. 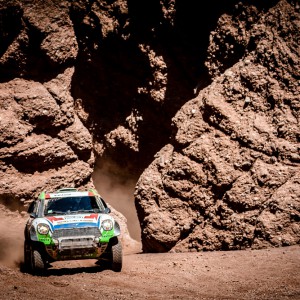